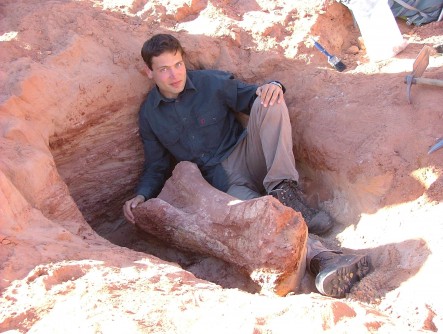 University of Chicago paleontologist Nizar Ibrahim has been named a 2014 Emerging Explorer by the National Geographic Society.

Newswise — The National Geographic Society has selected University of Chicago paleontologist Nizar Ibrahim to its 2014 class of Emerging Explorers. This year’s class comprises “a group of 14 visionary, young trailblazers from around the globe whose innovative ideas and accomplishments are making a significant difference in the world,” National Geographic said in its announcement.

The Emerging Explorers Program recognizes and supports uniquely gifted and inspiring adventurers, scientists and innovators who are at the forefront of discovery, adventure and global problem-solving while still early in their careers. Each emerging explorer receives a $10,000 award to aid further research and exploration.

Ibrahim is a postdoctoral research scholar in organismal biology& anatomy. Born and raised in Berlin, Germany, Ibrahim has been interested in dinosaurs and other fossil vertebrates since a very early age.

Ibrahim scours the deserts of North Africa for clues to life in the Cretaceous period, when the area was a large river system teeming with a profusion of diverse life forms. In addition to unearthing many huge dinosaur bones, he has discovered fossil footprints and a new species of flying reptile with an 18-foot wingspan that lived 95 million years ago.

His upcoming paper describing the ecosystem of what is now Morocco’s Sahara Desert in the mid-Cretaceous period will be a milestone, providing the most detailed account of the diversity, paleoecology and geologic context of fossil vertebrates from North Africa. His description is especially important, since northern Africa and the mid-Cretaceous are underexplored and underrepresented in paleontology. “We found an entire lost world; a window on a moment of major evolutionary change,” he said.

The new Emerging Explorers are introduced in the June 2014 issue of National Geographic magazine, and more information on them can be found at http://www.nationalgeographic.com/emerging.

Emerging Explorers may be selected from virtually any field, ranging from the society’s traditional arenas of anthropology, archaeology, photography, space exploration, earth sciences, mountaineering and cartography to the worlds of technology, art, music and filmmaking.

“National Geographic’s mission is to inspire people to care about the planet, and our Emerging Explorers are outstanding young leaders whose endeavors further this mission. We are pleased to support them as they set out on promising careers. They are visionaries and innovators in their respective fields and will help lead the world in a new age of exploration,” said Terry Garcia, National Geographic’s chief science and exploration officer.