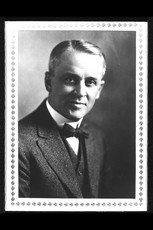 Robert Millikan received the 1923 Nobel Prize in physics for expeirments he conducted in the Ryerson Physical Laboratory building at the University of Chicago.

Newswise — The American Physical Society will designate the University of Chicago as an historic physics site to commemorate the work of Nobel laureate Robert Millikan in a ceremony at 4 p.m. Thursday, Nov. 30. Millikan received the 1923 Nobel Prize for experiments conducted in the Ryerson Physical Laboratory building, 1100 E. 58th Street. During a ceremony, the APS will present a plaque to the University honoring Millikan's research. Participating in the ceremony will be

John S. Rigden, Chairman of the APS Historic Sites Committee, and Honorary Professor of Physics at Washington University in St. Louis. The ceremony will take place in room 106 of the Kersten Physics Teaching Center, 5720 S. Ellis Ave. Following the ceremony, Pier Oddone, Director of Fermi National Accelerator Laboratory, will present a colloquium titled "The Path Forward for Particle Physics." The public is invited to attend both events. Early in his career, Millikan had distinguished himself as a teacher and textbook writer. But physicists consider Millikan's oil-drop experiment to be his greatest single research contribution, Kadanoff said. In the experiment, Millikan measured the electrical charge of individual electrons, showing that electrical charge came in small units called "quanta."

Also important was Millikan's measurement of the photoelectric effect, Kadanoff said. The photoelectric effect is the emission of electrons that results when light strikes certain metal surfaces. Millikan's measurement provided an important value for quantum mechanical equations, which describe physics on the subatomic scale. "It's remarkable that a single individual in independent experiments measured two of the most important quantities in all of physics," Kadanoff said.

Millikan was a faculty member at the University of Chicago from 1897 to 1921, when he left to head the newly formed California Institute of Technology. Born in Morrison, Ill., in 1868, Millikan died in Pasadena, Calif., in 1953. Since 2004 the APS Historic Sites Committee has selected 11 historic physics sites. These sites include Washington University in St. Louis, where Arthur Holly Compton performed his Nobel Prize-winning experiments before coming to the University of Chicago. Also on the list is Case Western Reserve University in Ohio, where 1907 Nobel laureate Albert Michelson did likewise. It was Michelson who appointed Millikan and Compton to their faculty positions at Chicago.