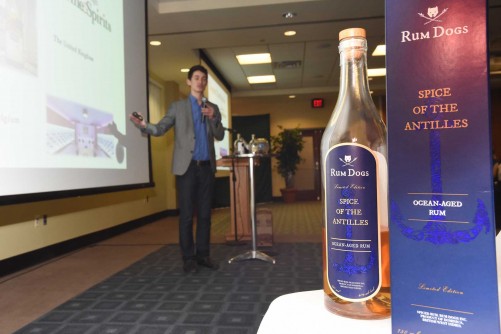 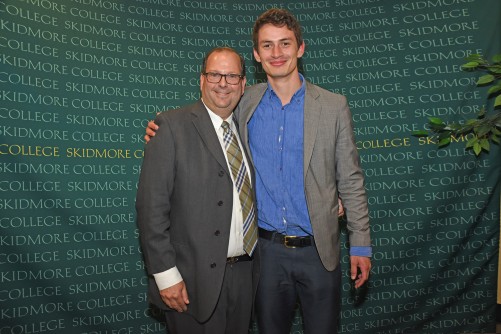 Newswise — A Skidmore College senior’s effort to revolutionize the maturation of rum by aging it in the ocean received a major boost earlier this month as the eight judges in the Kenneth A. Freirich Business Plan Competition awarded his startup, called Rum Dogs, the $20,000 first prize.

Alexander Nassief ’16 has come up with a patent-pending technique that reduces the time required to age a premium rum from five years to six months. With his winnings, Nassief is certain he can bring to market by the end of the year 2,500 bottles of a new premium rum.

Nassief was mentored by Skidmore alumna Sara Arnell, senior managing director of the Magrino Agency. “Alex has a dogged determination to innovate the rum category and set a new standard for production, quality and taste,” she said. “This prize was hard won and well deserved.”

The second prize of $10,000 at the April 8 competition went to juniors Jamie Benjamin '17 and Leif Catania '17 for their effort to establish Adirondack Apparel and launch a line of men's and women's clothing that speaks to the spirit of the Adirondack Mountains. Their signature product, already available for purchase online, is the “Saratoga” shirt, which combines the “classic style of an Oxford shirt with the comfort of mountain flannel.”

Third prize of $5,000 went to sophomores Noam Kahn, Dhruv Singh, and Zack Jones for their startup, AuxNation, which is developing a mobile app to help DJs better match playlists with the preferences of event attendees.

The fourth prize of $2,500 was awarded to senior Jonah Epstein for MyCity Brew, which is crowdsourcing a distinctive Buffalo, N.Y., beer.

A special $5,000 prize for social entrepreneurship was awarded to senior Claire Lindsay, who is establishing a cooperative, Green Onion LLC, to help entrepreneurial farmers in the Black Dirt region of Orange County.

More than 285 students and 175 businesses have entered the competition, which Ken Freirich, Skidmore College Class of 1990, established in 2010 to encourage students to follow their passions with a transformational entrepreneurial experience. Freirich is president of Health Monitor Network.