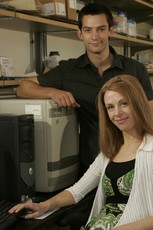 Arizona State University associate professor Gro Amdam (front) leads a group of researchers, including postdoctoral fellow Florian Wolschin, who are shedding new light on the development of colonial insects from solitary ancestors through study of a primitive social order of wasps.

Newswise — When the larvae of the primitive social insect Polistes metricus, a paper wasp, slips into the quiet pupal stage, she doesn't know if she'll arise a worker or gyne (future queen) " unless she consults with Arizona State University's social insect researcher Gro Amdam.

Amdam's group is shedding new light on the development of colonial insects from solitary ancestors through study of a primitive social order of wasps. In a paper highlighted on the cover and published Aug. 28 in the Proceedings of the National Academy of Sciences (PNAS), ASU's Amdam and Florian Wolschin teamed up with Kari Norberg, from Amdam's laboratory at the Norwegian University of Life Sciences, and James Hunt and others from the University of Missouri. They reveal that the Polistes larvae that can become future queens show signs of developmental diapause, a period of overt quiescence and a life history trait of many insect orders.

How can the larval environment determine future royal stature? The concept of environmental cues, things like weather, shorter day length, or food availability, determining destiny seems distinctly foreign in humans. However, Amdam, an associate professor in ASU's School of Life Sciences, has pioneered an understanding of how developmental programs underlying diapause and reproduction can be adopted in primitively social settings to result in the complex social behaviors and castes found in advanced insect societies.

"Because the biology and physiology of the Polistes wasp is more 'transparent,' instead of highly derived as is often the case of highly social insects, such as honey bees, we can more easily backtrack, follow the footprints of evolution and uncover the pathways that castes originally evolved from," says Amdam.

Many species of highly social insects have two distinct female castes, workers and queens, with traits set in larval life. However, Amdam points out that the primitive social Polistes wasp was originally believed to lack developmental castes entirely, and to be more like its solitary ancestors. Individual females were thought to simply "choose" to become workers or queens " as adults. However, previous work by Hunt and Amdam, published in Science Magazine in 2005, suggested otherwise, hypothesizing that a bias toward "queen-ness" might occur earlier in life than previously believed, and be tied to an old life history trait, diapause, found in both solitary and social insects.

Hard evidence was provided by the discovery by Hunt, Norberg, Wolschin, Amdam and co-workers of differing hexamerin storage protein levels in Polistes larvae and pupae destined to become workers or gynes. In combination with a prolonged developmental time in gynes, this finding indicates that differential provisioning of the larvae, prior to pupation, serves to promote a caste bias in which a higher level of nourishment results in primarily gyne-destined female wasps. According to Amdam, the developmental program of diapause, that also typifies solitary insects without castes, was "adopted by evolution to produce Polistes females that look the same but differ in their potential to attain two distinct social roles." This adoption, the PNAS paper poses, "provides the foundation for a major developmental switch: the divergence of workers and potentially reproductive gyne castes in some social hymenoptera."

The significance of their research in Polistes is two fold, according to the authors, "it challenges the view that workers and gynes represent behavior options equally available to every female offspring, and it exemplifies how social insect castes can evolve from casteless lineages."

Amdam and her colleagues believe this research brings scientists one step closer to "understanding how developmental programs in solitary insects can be remodeled to yield complex, social orders marked by castes and task specialization."

This isn't the first system in which Amdam has revealed how ancestral programs have been co-opted to promote the evolution of castes. Amdam's group established for the first time how genetic pathways tied to "reproductive and molecular signaling cascades that exist in solitary species may have been utilized to yield reproductive queens, and non-reproductive sisters, workers, in the social order of honey bees." In work published in the journal Public Library of Science One (PLoS One) in 2007, the researchers showed that a key regulator for caste fate was the ancestral protein kinase TOR ('target of rapamycin'), which had become the transducer of the signal determining if a honey bee larva grows to be worker or queen.

"The fact that workers and queens can emerge from ancestral pathways in both complex and more primitive social insects helps us understand what evolution builds from when it produces seemingly radical new phenotypes," Amdam says.

Amdam's innovative approaches with the use of social insect models led to her selection in June 2007 as a "Biomedical Scholar" by The Pew Charitable Trusts, and "Outstanding Young Researcher" by the Research Council of Norway. The resulting $1.8 million in awards will fund her laboratories in ASU's College of Liberal Arts and Sciences and the University of Life Science in Norway, and could potentially lead to new insights into human traits, such as aging, that have likely been molded by social evolution.

Proceedings of the National Academy of Sciences (28-Aug-2007)