Lead On: The Campaign for Tomorrow at Pacific University to focus on securing a bright future for the 168 year-old institution. 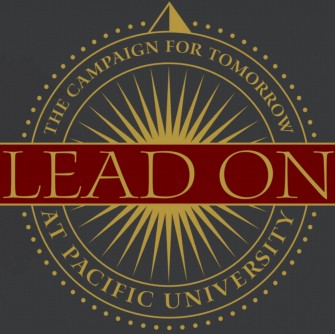 Newswise — Pacific University this week is publicly launching its comprehensive campaign to raise $80 million by 2020.

Lead On: The Campaign for Tomorrow at Pacific University is about carrying a 168-year tradition of excellence and opportunity into a bright new future, said President Lesley Hallick.

“From our earliest days as a school for Oregon Trail orphans, Pacific has always been about the sharing of knowledge and the opportunities afforded by an education,” Hallick said. “The Lead On campaign will take that tradition forward as we work to make the Pacific experience affordable and accessible to more students and to give all of our students the opportunity to change their own lives and the lives of those around them.”

The Lead On campaign will focus on three pillars: endowments, particularly for student financial aid and program growth; learning facilities and resources; and investments in innovation and growth.

Recent gifts to the university have already paved the way for a strong start. In its “silent phase,” the campaign has raised more than $43 million. Philanthropic giving to Pacific has increased 112 percent in the past five years.

In October, Pacific named its Forest Grove Campus library in honor of alumni Khiem “Tim” ’74 and Thuy “Cathy” Tran ’74, who started an endowment to support the teaching, learning and scholarly environment provided in Pacific University Libraries. Pacific also named Ledbetter Field, the state-of-the-art home to the Boxers Division III football, soccer and lacrosse teams, for supporters Kim and Barb Ledbetter. Kim Ledbetter, retired senior vice president of Standard Insurance Group, is a trustee at Pacific. The Ledbetters are longtime supporters of the university’s athletics programs, the Ledbetter Endowed Scholarship Fund and other endeavors.

The Lead On campaign kicks off this week with Boxer Excellence Week, a weeklong celebration of unrestricted success at Pacific, that will include email and social media communications with alumni and friends, as well as a student-led philanthropy fair on the Forest Grove Campus. Boxer Excellence Week will be the first opportunity for many of the university’s 28,000 alumni, along with community friends, to take part in the Lead On campaign.

Meanwhile, the university also honors its most generous donors this week at its annual Celebration of Giving, where a number of notable supporters will be inducted into Pacific’s giving societies in recognition of their support of the university and its students.

Pacific offers a rare, nearly even combination of undergraduate and graduate programs in the arts and sciences, business, education, health professions and optometry. Drawing students from around the world, but most notably from the West Coast and Hawai‘i, Pacific has one of the most diverse student bodies of its peers in the region. Nearly half of its 3,800 students are from traditionally underrepresented backgrounds, and almost a quarter are the first in their families to attend college.

The university’s foundation is its undergraduate liberal arts focus, where students choose from more than 60 areas of study and often live on the residential Forest Grove Campus, amid a rich mix of athletic, social and civic activities.

Pacific also is well-known for its healthcare programs. Its College of Optometry was one of the first in the country and remains the only one of its kind in U.S. Pacific Northwest. The College of Health Professions, which just celebrated its 10-year anniversary at Pacific’s Hillsboro Campus, is home to eight schools, offering terminal degrees for healthcare providers and administrators. Both programs focus on interprofessional clinical care with a growing emphasis on research. Private research funding for the university has grown substantially in recent years.

Meanwhile, Pacific’s College of Education offers undergraduate and graduate degree programs for teacher preparation in Forest Grove, Eugene and Woodburn, as well as a master’s program for speech-language pathologists. The college highlights innovative outreach programs designed to train teachers from underrepresented populations and also prepare teachers in high-need fields, such as science, math and ESOL.

Most recently, Pacific opened its College of Business, taking advantage of its placement as the only four-year university in Oregon’s economic powerhouse, Washington County.