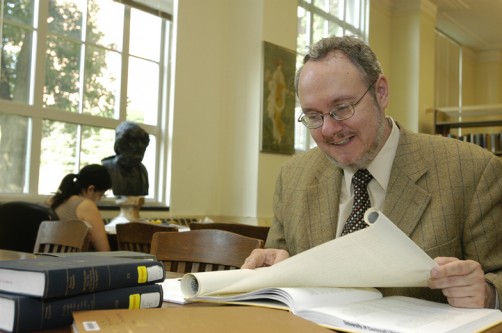 UC's Peter Van Minnen, editor of the Bulletin of the American Society of Papyrologists.

Newswise — Education, jobs, religion and even the cultural effects of bilingualism were as topical in the ancient world as they are today.

All of these topics and more are featured in translations of ancient papyrus in the University of Cincinnati-based journal, “Bulletin of the American Society of Papyrologists,” due out Dec. 2. The annually produced journal, edited since 2006 by Peter van Minnen, UC associate professor and head of classics, features the most prestigious global research on papyri, a field of study known as papyrology. (Papyrology is formally known as the study of texts on papyrus and other materials, mainly from ancient Egypt and mainly from the period of Greek and Roman rule.)

Below are five topics treated in the 2011 volume of the “Bulletin of the American Society of Papyrologists.”

NAILING DOWN JOB TRAININGChris Eckerman of the University of Oregon edits a Greek apprenticeship contract for an uncle to teach his nephew the carpentry trade in an Egyptian village. The contract dates from the time of Roman rule in Egypt, which began in 30 BC. About 50 such contracts exist from that time period in Egypt. For instance, one contract from Alexandria calls for four years of musical training for a slave. Today’s college students can probably relate.

WHAT LANGUAGE DO BILINGUAL DREAMERS (AND GODS) USE?Stephen Kidd of New York University publishes an essay on dream records in bilingual (Greek and Egyptian) papyri from the second century BC. Dreams were then regarded as messages from the gods, and it would be safe to assume that in ancient Egypt, it was the “local” gods speaking to the local population. But this was a time when there were fully bilingual people in Egypt under Greek rule. Did they dream in Egyptian or Greek? Were the gods that were speaking the local Egyptian gods or “imported” Greek gods? It would seem that Egyptian interpretations held sway. While Greeks or sufficiently Hellenized people would record their dreams in Greek, the dream interpreters were Egyptians or at least thoroughly trained in Egyptian dream interpretation, and the record shows that essential portions and word associations (puns) were provided and unraveled for meaning in Egyptian.

A MIRACLE FINDAlbert Pietersma and Susan Comstock of the University of Toronto edit pages that, until recently, were missing from a famous early Christian papyrus codex (manuscript volume) from the fourth century AD. The codex itself has a fascinating history. It was acquired in the 1950s by the University of Mississippi with funds raised from, among others, William Faulkner. But, as things go, the university later sold the codex to a private collector in the 1980s, and it later wound up in the hands of a Norwegian shipping magnate who now owns the bulk of the codex. However, Pietersma and Comstock found missing pages from the codex in Dublin.

The codex, with its early Christian texts in Greek and Coptic, originally came from a monastery in Upper Egypt that was founded by Pachomius, an Egyptian Christian, who was the originator of the monastic way of life in which male or female monastics live together and have their possessions in common under the leadership of an abbot or abbess.

The recently found missing pages contain a Coptic prayer written by Pachomius for the annual Easter celebration. Arguably, Pachomius himself first recited this prayer at the end of the Easter service near the middle of the 4th century AD.

THE GREAT GRAIN ROBBERYRyan Boehm of the University of California, Berkeley, edits a 4th-century petition BC on papyrus, seeking justice from an administrator from Hermopolis. The petition charges an evil doer in an Egyptian village of stealing agricultural produce belonging to minors who are likely orphans.

FOREGOING MAGICTheodore de Bruyn and Jitse Dijkstra of the University of Ottawa publish a study of magical amulets from Egypt that contain Christian elements such as crosses and saints’ names. About 200 such texts survive from Late Antiquity (4th to 8th centuries AD), a time when the church fathers were combating the use of magical amulets by Christians. These amulets ranged from those seeking revenge and cursing opponents (for example, an insomnia curse) to those seeking healing, prosperity, success, protection and even exorcism.

Bulletin of the American Society of Papyrologists