New research by UC Riverside psychology professor finds that actions of prayer help with silent contemplation and reflection, young children pay attention to parents to figure out who God is 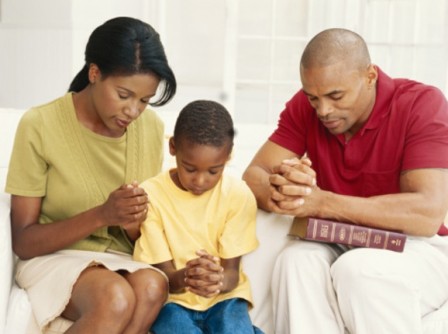 Engagement in prayer in the preschool years is one foundation upon which concepts of God are built explained Rebekah Richert, psychology professor at UCR.

Newswise — RIVERSIDE, Calif. (www.ucr.edu) – Preschool-aged children, and their parents, are more likely to view the physical actions of prayer (i.e., closing eyes, folding hands) to help with reflection and communicating with God. This is according to a new study by Rebekah Richert, a psychology professor at the University of California, Riverside. The paper, titled “Folding Your Hands Helps God Hear You: Prayer and Anthropomorphism in Parents and Children,” was published in Research in the Social Scientific Study of Religion. The study was funded by the Social Science Research Council New Directions in the Study of Prayer Initiative and The John Templeton Foundation Gods in Minds Initiative.

“Many current theories of how children develop an understanding of God fail to account for religious differences in conceptions of God or differences in how parents teach their children about God,” said Richert. “The lack of diversity in research has led to the premature conclusion that young children have a similar concept of God regardless of religious tradition. The goal of this study was to examine how children differ in their ideas about who God is and how those differences relate to the most common way parents teach children about God: prayer.”

Engagement in prayer in the preschool years is one foundation upon which concepts of God are built. Prayer provides a context in which children are encouraged to think about God, and the findings indicate that the actions involved in prayer are incorporated into children’s concepts of God in early childhood.

In a separate study called, “Who Cares if I Stand on my Head When I Pray? Ritual Inflexibility and Mental-State Understanding in Preschoolers,” published in Research in the Social Scientific Study of Religion, Richert found that children believe the traditional manner of praying is the only way to pray, because they think their parents want them to pray that way. The results show that in general children believe that communicating with God could not incorporate unconventional actions.

“Past research has demonstrated that children know that prayer actions are a part of their religious tradition, and generally believe you have to use those specific actions when you are communicating with God,” said Richert. “We were interested in whether this is because children believe God needs them to perform those actions or whether they believe the people around them (like their parents) need them to perform those actions.”

Folding Your Hands in Prayer Helps You Concentrate on God

According to the study “Folding Your Hands Helps God Hear You: Prayer and Anthropomorphism in Parents and Children,” previous research indicates that preschool-aged children are especially attuned to the physical actions of prayer, as they tend to associate these special actions with communicating with God. The current study examined if views of parents and children about the function of actions involved with prayer are related to or provide the basis for children’s developing conception of God.

Richert and her team also looked at the relation between these views and whether children view God as having human-like limitations. A main goal of this research was to examine children from a diversity of religious traditions. Participants included 157 parent-child pairs – children ranged in age from 3 to 6 years-old, and their parents self-identified as belonging to one of three religions: Protestant Christian, Roman Catholic, and Muslim.

Researchers hypothesized that children and parents may view the functions of prayer actions as: 1) serving the purpose of keeping still, or helping the child control his or her body, 2) helping the person think about and reflect on God, and 3) helping the individual communicate with God. Richert also examined the attribution of human-like or anthropomorphic limitations to God by parents and preschool-aged children, and hypothesized Muslim children and parents would have less anthropomorphic conceptions of God.

Results showed that in terms of children’s views on prayer actions, they were significantly more likely to claim that closing their eyes or folding their hands helped them think about and reflect on God, rather than the action serving the purpose of keeping still, or in helping communicate with God. Results were similar for parents, but some parents additionally claimed that prayer actions did serve a purpose of keeping still and communicating with God.

“Religious group affiliation played a role in parents’ and children’s concepts of God and prayer. Muslim children and parents did not attribute human-like limitations with God as much as Protestant and Catholic counterparts,” explained Richert. “These differences in anthropomorphism were related to the different ways in which Muslim, Catholic, and Protestant parents view prayer. Muslim parents almost exclusively viewed the actions of prayer as supporting quiet contemplation, whereas Protestant and Catholic parents also supported the idea that prayer actions helped children to sit still and to communicate with God.”

You Can’t Do That While Praying

In her study, “Who Cares if I Stand on My Head When I Pray? Ritual Inflexibility and Mental-State Understanding in Preschoolers,” Richert notes that previous research has shown that young children understand prayer as a form of communication – additionally they are sensitive to the physical behaviors of prayer. But, as she explained, it is unclear how children’s sensitivity is related to their understanding of prayer as a form of communication. Given that children’s view of flexibility regarding prayer may be due to viewing prayer as facilitating communication with God, in this study Richert made two hypotheses.

The first hypothesis: As children attribute more limited knowledge to God, they will view prayer as less flexible. According to Richert this is supported by research examining adults’ views on ritual flexibility and research examining what children think God knows. “It has been found that if adults thought that the supernatural agent (i.e., God) to whom a ritual was directed was omniscient, then the behaviors of the ritual could be flexible, but if the supernatural agent was not omniscient, then the behaviors of the ritual could not be flexible,” said Richert.

The second hypothesis: As children attribute more limited knowledge to humans they will view prayer behaviors as less flexible. “From this hypothesis, children may view the behaviors of prayer as critical for communicating with other people, but not God, the intention of prayer,” Richert said.

“In general, children were inflexible about prayer actions, indicating that people cannot pray using unconventional prayer actions. In contrast, parents moderately indicated that a person could pray however they wanted,” explained Richert. “The findings confirm that preschoolers view prayer as a social (rather than solitary) practice done with other people (not alone) and that the traditional actions of prayer communicate to other people, rather than God, that the child is engaged in prayer.”Results also showed that children attributed more limited knowledge to their parents than God. And children’s assessment of their mother’s knowledge, but not God’s knowledge, predicted their views about the flexibility of prayer actions. Children’s understanding of God’s knowledge is unrelated to views about flexibility in behaviors associated with prayer, because children attribute infallible knowledge to God.

Richert has an upcoming manuscript, under revision for the British Journal of Developmental Psychology, examining religious context factors such as religious affiliation and parent views of prayer that predict how children come to differentiate the specialness of God’s mind from the limitations of human minds. Findings indicate that Muslim children more strongly differentiate the capabilities of God’s mind (i.e., omniscience) from the limitations of human minds (i.e., false beliefs) than Protestant, Catholic, and religiously non-affiliated children, and children who have greater differentiation between God’s and humans’ minds have parents who have the least human-like conceptions of God.