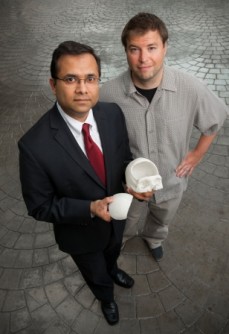 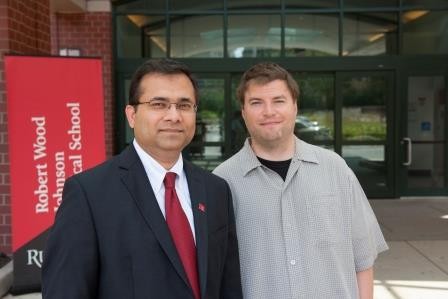 Newswise — New Brunswick, N.J., July 20, 2017-- After two months in a coma, Chris Cahill, 35, of New Brunswick, New Jersey woke up confused about where he was and what had happened to him. Cahill was found unconscious from unknown trauma resulting in severe injuries to his frontal lobe, with brain swelling so dramatic it was life threatening, explained to Gaurav Gupta, MD, assistant professor of neurosurgery at Rutgers Robert Wood Johnson Medical School. Dr. Gupta performed emergent surgery on Cahill to relieve the brain swelling with the intent of replacing the skull after the swelling subsided. However, the patient’s own skull was infected and as a result was unusable. At that point, Dr. Gupta decided the best solution to replace the missing skull bone was to use 3-D printing.

3-D printing is making three-dimensional objects from a two-dimensional digital file. It has become popular among medical devices because of its precision and accuracy. For Cahill, 3-D printing was used to create a model of his skull, and also a custom implant to replace the missing piece using his CT scan. “The model was used for practice,” said Dr. Gupta, director, Cerebrovascular and Endovascular Neurosurgery at Robert Wood Johnson Medical School and Robert Wood Johnson University Hospital. “Once the skull implant was printed, millimeter by millimeter, we matched the new implant to the skull model, ensuring a perfect fit.”  Two separate implants were printed because the area of the skull was so large, which Dr. Gupta then bonded together. When Cahill learned part of his skull would be replaced via 3-D printing, his first reaction was disbelief. “I wondered, ‘can they really do this?’ But Dr. Gupta saved my life once and I trusted him completely.”

Dr. Gupta then collaborated with a medical device company - DeputSynthese CMS to 3-D print a custom cranial skull implant for Cahill. The implant is made of PEEK (polyetheretherketone), which is chosen for its strength, stability and biocompatibility. Prior to 3-D printing, surgeons used metal mesh to replace pieces of the skull, but it was not as strong or as precise. The 3-D printed model is an exact and custom fit because it is created using the patient’s CT scan.  Because Cahill’s skull damage was significant and irregular, 3-D printing was the best choice. According to the company, these 3-D printed implants have a better anatomic fit, reduce operating time and have more satisfying aesthetic results than traditional models. The implants are also impact and fracture resistant.

Before the surgery, the patient needed to grow additional skin to cover the implant. To ensure the best possible aesthetic result, Dr. Gupta enlisted the help of Tushar Patel, MD, plastic and reconstructive surgeon and partner at The Plastic Surgery Center, to insert a tissue expander which enabled Cahill to have enough skin for surgery. March 28, Gupta and Patel inserted the skull implant during a four-hour surgery, shorter than a traditional procedure due to the precise and custom fit of the implant, which allowed for fewer modifications during the process. The surgery went smoothly and Cahill recovered well. Because the incision is behind the hair line, the scars cannot be seen. “I was nervous about what I would look like after the surgery,” said Cahill. “I was happy I looked exactly the same and felt like myself again.”