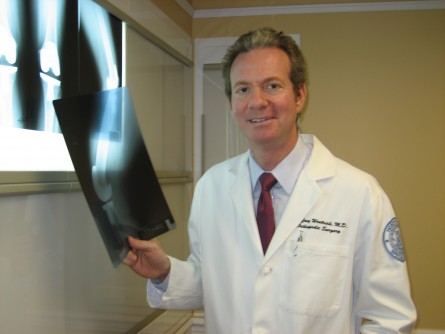 Newswise — Diane Vellucci says she has much to be thankful for this holiday season. At this time last year, she doubted she would live to see another Christmas. All because Diane, 56, was allergic to her knee replacement, or, more specifically, to the metal used in the joint implant.

Extremely weak and in terrible pain, Diane traveled from her home in the Philadelphia area to New York City to see Dr. Geoffrey Westrich at Hospital for Special Surgery (HSS). Dr. Westrich, an expert in revision knee and hip replacement, would take out the implants and replace them with new ones that her body could tolerate. “He gave me my life back,” she says.

Diane saw Dr. Westrich after a nine-month ordeal that started after a double knee replacement at another hospital. Suffering from severe osteoarthritis, she opted for the surgery after learning from her research that the procedure has a very high success rate in eliminating pain and restoring mobility.

Diane chose to have the operation on both knees at the same time. But months later, instead of getting better, her knees still ached. And now the pain was spreading throughout her body to her shoulders, arms and legs. She got weaker and weaker. Four months after knee replacement, she could no longer get dressed without assistance, pick up a half-gallon of milk or turn over in bed. She says she became a different person -- terribly weak, in constant pain and very unhappy.

“It turned out she was allergic to the metal in the knee implants, and this was causing the severe symptoms throughout her body,” said Dr. Westrich, director of research, Adult Reconstruction and Joint Replacement at Hospital for Special Surgery.

For Diane, it took nine months of searching for answers, of being told ‘you had knee surgery, you’re supposed to be in pain,’ and of being made to believe she was a nuisance to the doctors she pleaded with for help.

She says when her original orthopedic surgeon refused to take her complaints seriously, she called numerous orthopedists in the Philadelphia area, only to be told they would not see her before a year went by.

“I thought, ‘why is this happening to me?’ I’m not a bad person,” she says. “I was being turned away by almost everyone; it was so hurtful.”

Diane was prescribed so many medications, she lost count. The orthopedic surgeon who performed the original surgery told her to see a rheumatologist. For six months, Diane took methotrexate, a powerful drug used to treat cancer and some rheumatologic conditions.

“Of course, nothing helped,” she recalled. “I became weaker and weaker and thought I would soon be in a wheel chair. I didn’t think I’d be here now. I’m a realist. I told my husband my body was shutting down and I was going to die.”

She was finally referred to Dr. Geoffrey Westrich and traveled to HSS. When blood tests confirmed Diane was highly allergic to nickel and cobalt, he replaced the implants in both her knees using prostheses that did not contain those metals.

“It all happened very fast,” she recalls. “I went to the Hospital for Special Surgery for the consultation with Dr. Westrich and soon after had the first revision surgery. I’m so thankful he listened to me. He cared, he was compassionate. He would not give me any guarantees, but I was so grateful someone was trying to help me.”

The first revision surgery on her left knee took place in January 2014. After the surgery, week by week, her pain diminished. In May, she had the second revision surgery. By July, she says her pain was almost gone. She says she is now doing well, has regained the use of her arms, can run errands and walk through a shopping mall. She can once again visit her mother who lives in a nursing home.

“It’s incredible that such severe symptoms could resolve so rapidly once we replaced the metal implants,” Dr. Westrich said. “It’s important for any patient who has a problem after joint replacement to see their doctor and insist on being taken seriously.”

Diane says the ordeal has taught her that you need to be your own advocate, and now she wants to help others who “may be in the same boat.”

Although severe reactions to metal implants are rare, Dr. Westrich says before joint replacement, orthopedic surgeons are advised to ask patients if they have ever had a reaction to metal, such as costume jewelry. “If the answer is yes, the orthopedic surgeon can select an implant that does not contain a specific metal, most commonly cobalt and nickel,” he says. If there is any doubt, patients can be tested to see if they may have a specific metal allergy.

“If the doctor dismisses the patient’s concerns, the individual should find another physician, preferably at a joint replacement center that does many, many procedures and is used to dealing with complications,” Dr. Westrich says. “And it is truly best to have the surgery done in such a joint replacement center in the first place for the best chance of a good outcome.”

Fortunately, revision surgery took care of Diane’s problem. “Because the metal allergy is not seen too often, you have to wonder how many people are going undiagnosed and suffering needlessly,” Diane says. “I feel so lucky I eventually found help.” # # #