Taking on Life after Cancer 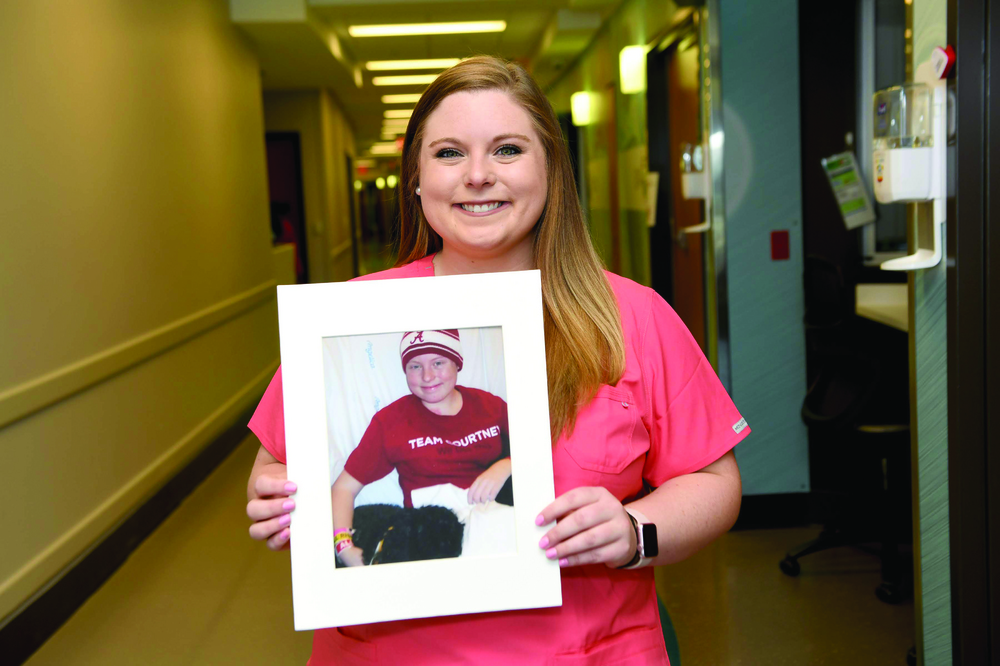 Newswise — BIRMINGHAM – September 2019 marks two years since Courtney Alvis was hired as a pediatric hematology/oncology nurse at Children’s of Alabama, where in 2010 she was diagnosed with acute T-cell leukemia at age 16.

Alvis is now in remission, but she has endured the challenges that many of her patients experience today – from chemotherapy to weight fluctuation to lethargy to hair loss to neuropathy. And she knows the vital role nurses play in patients’ lives each day.

“They became my family and obviously led me to want to do the same for others,” Alvis said. “I was 16 and unable to go school, so my nurses became my friends, the people I hung out with.”

Alvis’s personal experience informs her work every day. She encourages her patients to “stay strong,” but she’s also aware that patients can tire of well-intended words of motivation at times. When that happens, she challenges patients to find happiness in the small things.

“Treatment can be so monotonous sometimes,” she said. “I remember trying to find ‘little happys’ throughout the day. You’re being put to sleep, but it’s good sleep. You’re stuck in the hospital, but there are all these great people caring for you and happy to see you. Small things can make a difference.”

Alvis remembers the first few months after her 16th birthday – driving to the mall, going to movies and enjoying her newfound independence. But that all changed on November 1, 2010, after what Courtney thought would be a routine visit to the pediatrician.

The pediatrician found that Courtney’s right lung had collapsed and he also feared she might have a much more serious condition – leukemia or perhaps lymphoma. She was sent to Children’s of Alabama. After a bone marrow biopsy and a spinal tap, Courtney was told she had acute T-cell leukemia.

Those words marked the beginning of a journey with the Alabama Center for Childhood Cancer and Blood Disorders at Children’s of Alabama – a journey that continued with maintenance visits until doctors were sure Courtney had achieved a lasting remission.

Finding the “little happys” in her hospitalization no doubt influenced Courtney to become a Children’s nurse.

“Children’s is the only place I want to work,” she said. “I love the way we treat our patients and how we interact with them. I love the way that I look up to my nurses, and I want to be that person the kids look up to.”

Read more about the work underway at he Alabama Center for Childhood Cancer and Blood Disorders at Children’s of Alabama at childrensal.org/cancer.