21-Sep-2017 9:05 AM EDT, by Perelman School of Medicine at the University of Pennsylvania contact patient services
favorite_border 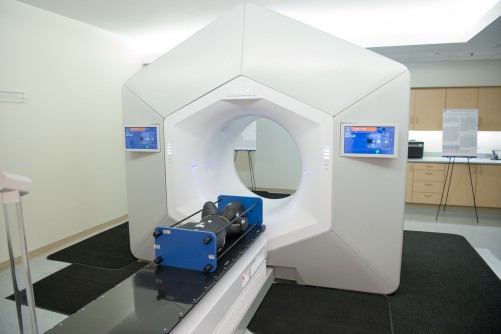 Newswise — PHILADELPHIA – Doctors at Penn Medicine have become the first in the world to treat a patient with a new treatment platform designed to streamline the way therapeutic radiation is delivered to cancer patients. The Varian Halcyon system has the ability to shorten the amount of time patients spend in treatment, and in some cases cut the length of each session by more than half. It was also designed to offer a more user-friendly approach for experts administering the treatment with the goal of making it easier to train new therapists. The first treatment was administered to a patient with head and neck cancer this month.

“This is a next-generation technology, and Penn is proud not only to have helped with its development, but also to build on our long history as radiation oncology innovators and be the first in the world to bring the new option to patients, as part of our continued pursuit to offer patients with cancers of all kinds the most advanced array of treatment options,” said James Metz, MD, chair of Radiation Oncology at Penn.

Starting in 2015, Penn collaborated with Varian, the platform’s manufacturer, on the development and validation of the new technology. The platform was designed with the goal of making it easier for technicians to use, involving just nine steps instead of the 30 or more that are currently involved on standard radiation therapy platforms. Testing conducted at Penn has shown that the radiation itself was delivered comparably to traditional platforms – or in some cases more accurately – while working at roughly twice the speed.

Because of the increase in speed, the platform means that patients spend less time undergoing each treatment session. In the case of the first patient treated, it took just 13 minutes to set up the therapy room, take images of the patient, apply the therapy, and break the equipment down. The patient was under the beam for just three minutes. In a typical case using other radiation technology, the whole process would have taken more than 20 minutes, including 10 minutes of total beam time.

In addition to head and neck cancer, Penn physicians plan to use Halcyon to treat breast and cervical cancer, as well as to shrink tumors for symptom relief among patients with metastatic cancers.

“Penn’s department of Radiation Oncology is a national and global leader in both proton and conventional radiation therapy including the development of global training and education courses,” Metz said. “Partnering with outside innovators to test and bring new technologies to the clinic is a great example of our leadership and collaboration in the field, and our commitment to offering more options to the patients we care for.”