9-Nov-2016 9:00 AM EST, by Perelman School of Medicine at the University of Pennsylvania contact patient services 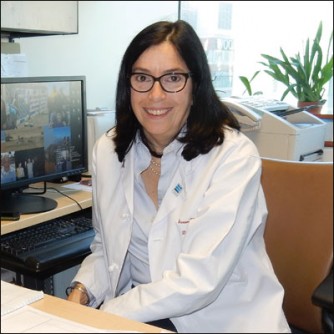 Newswise — PHILADELPHIA – Susan J. Mandel, MD, MPH, director of Clinical Endocrinology and Diabetes for the University of Pennsylvania Health System, and a professor in the division of Diabetes, Endocrinology and Metabolism in Penn’s Perelman School of Medicine, has been elected President-elect of the Endocrine Society. Mandel will officially begin her term in April 2017 and will take office as President in 2018.The Endocrine Society is the largest global membership organization representing professionals from the field of endocrinology including medical doctors, scientists, researchers, and educators. Its mission is to advance excellence in endocrinology and promote its essential and integrative role in scientific discovery, medical practice, and human health.

“Having worked with Susan for nearly 20 years here at Penn, I have seen firsthand her leadership, commitment to education, and clinical and research expertise,” said Mitchell A. Lazar, MD, PhD, chief of the division of Endocrinology, Diabetes and Metabolism. “Susan has delivered first-class care to her patients year after year, and is well-established as an international expert in the diagnosis, evaluation and treatment of thyroid nodules and thyroid cancer. She has also been an innovative leader of Penn's training program for Fellows in Endocrinology and Metabolism."

In addition, Mandel is director of the Fellowship Program in the division of Endocrinology, Diabetes, and Metabolism where she is overseas and educates upwards of 8 clinical and research fellows each year. Mandel serves as associate chief of the Division of Endocrinology, Diabetes, and Metabolism and she is director—and the creator—of the Thyroid Nodule Clinic at Penn Medicine, which was the second in the country to be established and the first of its kind in the tri-state area. Over the course of her nearly 30 year career, Mandel established the model for thyroid nodule evaluative services and she was one of the first endocrinologists to teach neck ultrasound to endocrine practitioners

Mandel’s clinical and research interests include the use of sonography in the evaluation of patients with thyroid nodules, the novel introduction of I-123 imaging in differentiated thyroid cancer, and thyroid disease during pregnancy. She has also been on the editorial boards of the Journal of Clinical Endocrinology and Metabolism and Thyroid. Among her involvement in the Endocrine Society, Mandel is also currently involved with the American Association of Clinical Endocrinologist, American Thyroid Association, Association of Program Directors in Endocrinology and Metabolism, Women in Endocrinology and the American Board of Internal Medicine. Most notably, Mandel has served on the taskforces that have written the ATA guidelines for the management of patients with thyroid nodules and thyroid cancer, as well as the management of thyroid disorders during pregnancy.

###Penn Medicine is one of the world's leading academic medical centers, dedicated to the related missions of medical education, biomedical research, and excellence in patient care. Penn Medicine consists of the Raymond and Ruth Perelman School of Medicine at the University of Pennsylvania(founded in 1765 as the nation's first medical school) and the University of Pennsylvania Health System, which together form a $5.3 billion enterprise.The Perelman School of Medicine has been ranked among the top five medical schools in the United States for the past 17 years, according to U.S. News & World Report's survey of research-oriented medical schools. The School is consistently among the nation's top recipients of funding from the National Institutes of Health, with $409 million awarded in the 2014 fiscal year.The University of Pennsylvania Health System's patient care facilities include: The Hospital of the University of Pennsylvania and Penn Presbyterian Medical Center -- which are recognized as one of the nation's top "Honor Roll" hospitals by U.S. News & World Report -- Chester County Hospital; Lancaster General Health; Penn Wissahickon Hospice; and Pennsylvania Hospital -- the nation's first hospital, founded in 1751. Additional affiliated inpatient care facilities and services throughout the Philadelphia region include Chestnut Hill Hospital and Good Shepherd Penn Partners, a partnership between Good Shepherd Rehabilitation Network and Penn Medicine.