3-May-2018 9:00 AM EDT, by Perelman School of Medicine at the University of Pennsylvania contact patient services 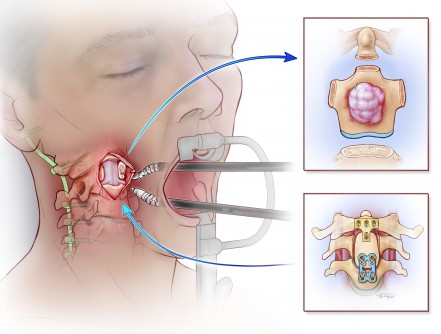 Newswise — PHILADELPHIA – Noah Pernikoff is back to his life in New York City after becoming the first patient in the world to undergo a complex three-part, robotic-assisted surgery. The robotic arms made it possible for the multidisciplinary team at Penn to successfully remove a rare tumor from Noah’s neck, where the skull meets the spine. The ground breaking surgery was completed by a multi-surgeon team, led by Dr. Neil Malhotra, at the Hospital of the University of Pennsylvania in August 2017 over a span of two days and more than 20 hours.

Chordoma is a rare type of cancer that occurs in the bones of the skull base and spine. A chordoma tumor usually grows slowly and is often asymptomatic for years. In the case of 27-year-old Noah Pernikoff, a 2016 car accident revealed his surprising diagnosis.

Among his injuries from the accident, Noah—who was working in New York City for a commercial contracting firm—tore his rotator cuff and had several herniated discs. More important, however, was his post-accident nagging neck pain, which lead to an x-ray that revealed a concerning lesion in his neck, on his cervical spine. The lesion was clearly unrelated to the accident, and far more concerning than the minor injuries he had endured. After making a recovery from the accident, Pernikoff’s father, a physician, encouraged his son to see a neurosurgeon for evaluation of the injury. The neurosurgeon Pernikoff saw ultimately recommended a biopsy of the spot, which resulted in a diagnosis of chordoma.

“I’m lucky because they caught mine early. For a lot of people, if it’s not found and treated early, it’s lethal,” Pernikoff said. “The doctor said if I hadn’t discovered it through the car accident it probably would have kept growing until it came to a point on my spinal cord where it caused paralysis or death. I feel very lucky in that regard.” Unfortunately, the neurosurgeon explained to Pernikoff, while surgery is known to be the best option for chordoma, Pernikoff’s would be too difficult to resect and he would have to try the second option, radiation with proton therapy.

Chordoma is extremely rare; it affects only one in 1 million people each year. Pernikoff’s specific type of chordoma, located on his C2 vertebrae, is even rarer, making treatment a challenge. Pernikoff’s neurosurgeon immediately referred him to Penn, where a multidisciplinary team reviewed his case, and his options, and began crafting a treatment plan—not through radiation, but a complex surgery that had never been performed before.

Neil Malhotra, MD, an assistant professor of Neurosurgery and Orthopaedic Surgery and the vice chair of operations in the department of Neurosurgery, gathered a multidisciplinary team of physicians to treat Pernikoff’s chordoma. Malhotra planned to remove the tumor through a rare and complex spinal surgery approach. Bert W. O'Malley Jr., MD, a professor and chairman of the department of Otorhinolaryngology: Head and Neck Surgery, planned to aid Malhotra’s approach and improve Pernikoff’s recovery by using a trans-oral robotic (TORS) approach for the second part of the surgery. TORS is the world's first group of minimally invasive robotic surgery techniques, invented at Penn, to remove benign and malignant tumors of the mouth and throat.

“This would be a first ever use of a robot in this manner—a rare approach to an already rare and complex case,” Malhotra said. “Our team needed to reconstruct the removed area of Pernikoff’s spine using bone and rods, and that was only the beginning.”

The stakes were high. Because of the placement of the tumor, Malhotra said removal could compromise the structural integrity of Pernikoff’s spine, causing permanent paralysis. There was also a risk of complications such as bone and tissue breakdown, loss of sense of smell, fine motor skill issues, and complete paralysis. And, he said, “if we couldn’t remove the entire tumor, it would likely grow back, perhaps more aggressive than before.”

The surgery was performed in three parts. First, the neurosurgeons went through the back of Pernikoff’s neck and cut the spine around the tumor to prepare for the second stage, removing the tumor through his mouth. The key to this stage would be to make ultrasonic bone cuts—removing a piece of bone—around the tumor without touching it, and without injuring the spinal cord that lay between the neurosurgeon and the tumor/spinal column. With stage one success, O’Malley and a team of three head and neck surgeons used the surgical robot to clear a path so Malhotra could remove the tumor, and part of the spinal column, in its entirety through the mouth. Finally, the team reconstructed Pernikoff’s spinal column, which was now missing an important bone in his neck, using some of Pernikoffs’ own bone from his hip and rods to finalize stabilization of the newly built portion of his spine.

“The capability of this technology and procedure is revolutionary,” O’Malley said. “This surgery was groundbreaking and it’s a wonderful example of how versatile TORS is for tumors in the head, neck, and now spine.”

Now, nine months after the surgery, Pernikoff is already back to work in commercial contracting and says he’s forever grateful for the car accident that revealed his diagnosis and the life-saving care that he received at Penn Medicine.