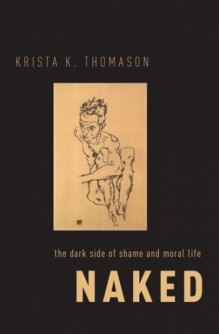 Newswise — Moral philosophers are in agreement that shame is a natural and valuable emotion that occurs most often when someone does not live up to their ideals or standards.

But what about the instances of shame that have little to do with failure, such as the shame some people feel when they are seen naked or the shame often experienced by the victims of violence?

This is the question at the heart of a new book Naked: The Dark Side of Shame and Moral Life from Assistant Professor of Philosophy Krista Thomason, released in January.

Thomason’s interest in the topic began while researching moral philosophers’ thoughts on cases of shame that, on the surface, should not be viewed as shameful.

“When thinking about these kinds of shame that seem irrational, I found that moral philosophers’ typical response was mostly to ignore them, or divide the cases down the middle and say there are two kinds of shame—one good and one bad,” she says. “And I think that’s the wrong answer. I think if you're a moral philosopher, you should care not just about one small subset of people's feelings. I don't think people feel two different kinds of shame. I think they just feel the same emotion about a wide variety of things.”

In the book, she examined previous and current moral philosophers’ ­– including Aristotle, John Rawls, and Martha Nussbaum ­– thinking about shame, analyzed the idea of "good cases" and the "bad cases" of shame, and figured out a way that shame, as a whole, can fit into one's moral life without dividing them down the middle.

“I think at the end of the day, when it comes to shame, you feel your self-conception shaken or diminished, and that’s true in both the so-called ‘good’ and ‘bad’ cases," she says. "Basically what happens is this thing that's part of you that you didn't necessarily identify with looms large suddenly in your sense of self. That's why shame feels very painful and discomforting.”

In the book, Thomason also examines the impact that the current social and political landscape has on shame. Because of social media, online shaming has increased exponentially. This comes with positives­­ ­– it can allow marginalized groups the opportunity to speak up about injustice­–and negatives, such as online mobs that can ruin lives.

“The temptation to shame people often arises out of good motivations," she says. "People simply want to see justice done. But, as I argue in the book, the shaming that you see online is actually just the flip side of shamelessness. Shaming online is obnoxious because the folks doing the shaming are usually taking their own opinions as the only ones that matter.”

In the conclusion of her book, Thomason argues that shame, along with all of its complexity, plays an essential part in moral life.

“Shame may be painful and ugly," she says, "but we have no reason to conclude that our moral emotional lives should be painless and pretty."

Krista Thomason is an expert in moral emotions, shame and shaming, Immanuel Kant, genocide, and child soldiers. Her work has appeared in numerous journals, including Kantian Review, Philosophy and Phenomenological Research, Southern Journal of Philosophy, and Philosophical Papers. Thomason earned her B.A. from the University of North Carolina at Greensboro and her M.A. and Ph.D. from the University of Illinois, Urbana-Champaign. She is a member of the American Philosophical Association, North American Kant Society, and the North American Society for Social Philosophy.

Naked: The Dark Side of Shame and Moral Life