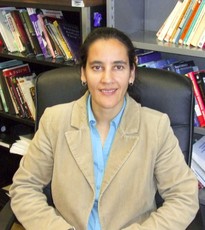 Newswise — A food security expert at the University at Buffalo says the worldwide food crisis is a direct result of the choices made by policy makers and the lack of attention paid to the food system and its relationship to global warming and fossil fuels.

"The current food shortage and rising prices of agricultural products are very serious problems and are going to get worse now that the use of agricultural land is encouraged for ethanol production," says Samina Raja, Ph.D., assistant professor of urban and regional planning in the UB School of Architecture and Planning.

As an active member of the national American Planning Association's (APA) Steering Committee on Food Systems Planning, Raja works to bring the importance of community and regional food planning to the attention of practicing planners nationwide.

"Although food insecurity in the world isn't a new phenomena, what is new is that the press and many policy makers -- the very people who did not attend to the crisis as it developed and therefore contributed to it -- are now alarmed by food shortages, riots and soaring prices," Raja says.

"Fortunately this is drawing much needed attention to the relationship between the energy crisis, climate change and the soaring cost and inadequate supply of food," she says. "The crisis is real and growing and I would like to hear the presidential candidates address this in a meaningful and educated way.

"The production, processing, distribution, sale and consumption of food and disposal of food waste historically have been paid little attention by U.S. urban and regional planners," she says, "so it isn't surprising that we find ourselves in this situation."

Raja points out what some may not remember: Once upon a time, the vegetables, flour, meat, fruits and dairy products Americans consumed came from family farms located in local rural areas outside of our cities.

"Today's conventional food system," she says, "requires the same products to travel roughly 1,500 miles from farm to fork. The transportation of food over long distances requires enormous quantities of fossil fuels, and causes severe damage to the environment and contributes mightily to global warming."

Raja also lays blame for the international food crisis at the door of agricultural policy makers at the World Bank and international development agencies who continue to promote a deeply entrenched industrialized corporate mode of food production, processing and delivery sustained by the use of massive amounts of fossil fuel.

In the U.S., and in poor and developing countries as well, Raja says there is another very serious issue that illustrates how each problem -- fuel depletion, climate change, food shortage -- aggravates the other.

"In our desperation to find alternative forms of energy, we are using vast amounts of farmland for fuel production," she says. "Land that once grew food or grazed cattle or sheep is now called upon to produce vast amounts of corn and other grains to be turned into ethanol."

"Not only does food now have to travel even farther from farms to get to our tables," she says, "but the mono-agriculture required to produce enough ethanol to replace fossil fuels depletes the soil and for that reason, cannot be sustained. Mono-cropping is much more susceptible to crop failure due to weather problems, insects and other environmental disasters," she says.

"The World Bank and international development agencies have pushed many developing countries to move from traditional food production systems, to industrialized agricultural systems like the one that is producing the problems we see today.

"So now farmers are more and more likely to produce cash crops like corn, soy beans and so on for export, instead of fruits, vegetables, grains and animals that can be consumed by the family.

"To eat, these families now have to purchase what they once grew. When things go awry on the unregulated world commodities markets as they have, the price of that food rises so high that people with limited means, including farmers, go hungry," she says.

Raja, an urban planner and civil engineer by training, is the principal or co-investigator on several studies that test the effect of the built and food environments on health. Her research is funded by the National Institute of Health, the Robert Wood Johnson Foundation, the Lincoln Institute of Land Policy and the Buffalo Niagara Medical Campus. Her many publications reflect her research on food security and health and community food systems and urban planning.