17-Nov-2017 11:05 AM EST, by Perelman School of Medicine at the University of Pennsylvania contact patient services
favorite_border 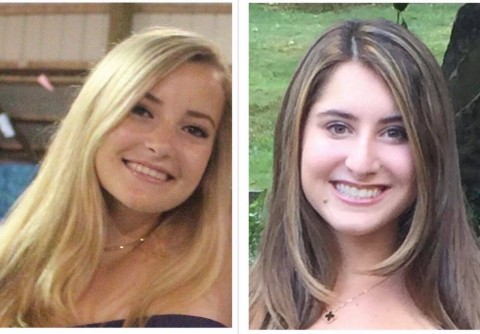 Newswise — It was September 14, 2001. At 26 weeks pregnant, Jackie Dickman was anticipating a holiday baby when preeclampsia – a condition characterized by high blood pressure that can cause harm to both mother and baby – brought her daughter Julia into this world weighing just over 1 pound. That’s about the equivalent of four sticks of butter.

“It was very touch-and-go in the beginning,” Jackie said. “We just didn’t know what would happen from one day to the next, but we’re so lucky that we had all the medical care and the means to help her do the best she could do. She’s our miracle baby.”

Just three months later, Debra Snyder was 27 weeks pregnant with a baby girl due in April when inexplicably, she had a placental abruption – a rare condition where the placenta separates from the uterine lining. An emergency c-section brought her daughter Sage into the world on January 28, 2002, weighing 2.2 pounds – just about the weight of one small pineapple – and very unprepared to regulate her body temperature or any of the things that a baby born full-term is ready to do.

Both Sage and Julia spent about three months in neonatal intensive care where they continued to grow and develop – at 26 weeks gestation, babies still have extremely delicate skin, their eyes are not able to adjust to light properly, and their muscles have not yet been fully formed. For babies in the womb, these last 14 weeks of gestation are critical to development. When born at this early stage, babies like Sage and Julia still have a lot of growing to do before they can become medically stable.

Both were connected to respirators and cared for around the clock until they were strong enough to go home (at a still terrifyingly small 3.8 pounds and 4.2 pounds, respectively). They had both beat incredibly tough odds to survive but would need intensive occupational and physical therapy to get help with development of motor skills, the spine, and the ability to swallow. Both Sage and Julia would also need follow up medical care and close monitoring by multi-disciplinary specialists for years to reduce the risk of long-term complications.

Though care for fragile babies like Sage and Julia has come a long way over the years, and research has uncovered warning signs for conditions that can cause prematurity, there are still no clear cut answers for why some women go into early labor. Each year, 15 million babies across the world are born premature – that’s one in 10, and in Philadelphia, it’s closer to one in nine. Over one million “preemies” will die this year alone, and even the lucky ones like Julia and Sage can experience long-term effects such as cerebral palsy, lung problems, vision and hearing loss, as well as learning difficulties, and behavioral problems.

Today, Sage and Julia are sophomores in high school. They do all the normal things high schoolers do – hang out with their friends, go shopping, and play sports after school. But for these two, the buck doesn’t stop there. Wanting to make a difference in the lives of other premature babies and families struggling to deal with the effects of prematurity, this month, Sage and Julia will launch an initiative to help put an end to the leading cause of death in newborns. Together with other teens who were born premature, Sage and Julia founded Preemies 4 Prevention, an effort that seeks to raise awareness of the devastating effects of preterm birth and support for research at Penn’s March of Dimes Prematurity Research Center.

“I was a preemie, and even though I didn’t see what my parents went through, they’ve told me how hard it was for them. They say I’m their miracle baby,” Julia said. “I know that I was fortunate enough to have the resources to survive and thrive, and not everyone is that lucky. Preemies 4 Prevention was created to help people who aren’t as fortunate as we were.”

The group will host its official launch party on Tuesday, November 21, but is already off to an incredible start. Earlier this month, Preemies 4 Prevention hosted an event at SoulCycle Ardmore. Thirty-eight riders (many of them teens) joined the class, raising nearly $3,000. Additional donations have already contributed an additional $8,500.

“A lot of our friends know someone who was born premature, or were interested in learning more about it,” Sage said, adding that the instructor at the Soul Cycle class shared stories about his own nephew who was born prematurely. “He really took to heart what we’re trying to do, and that helped make the class feel important and special to everyone there.”

Starting in November 2014, interdisciplinary teams of clinicians and researchers in Penn’s March of Dimes Prematurity Research Center began working to solve the mysteries of preterm birth. About 75 percent of preterm births are considered “spontaneous”— meaning there is no known cause. The other 25 percent of preterm births are medically indicated – meaning the mother has a condition such as preeclampsia or the fetus is in distress, requiring preterm delivery to safe its life. Researchers have spent a great deal of time trying to understand what makes a women go into labor early. But, in some cases, it seems the more researchers work to unravel the mystery, the more they realize just how complex the issue is. Penn’s multi-disciplinary teams work to understand prematurity through research examining mitochondria in the cells of reproductive tissues, changes in the cervix, and the placenta, all of which could be key contributors to preterm birth.

“People don’t talk about prematurity,” Debra said. “Just by being advocates for research to help address these issues, we’ve met so many other moms and families who have struggled with the effects of prematurity and there’s a very pervasive feeling that it’s almost taboo. We need to break down those walls and have an open conversation about it.”

Encouraging open conversation is part of the goal for Preemies 4 Prevention. As ambassadors for the organization, Sage and Julia say they hope that by getting teens to join the effort, they’ll be able to break down some of the stigma attached to prematurity.

“Our friends are joining the effort because the more they hear about what we went through, the more they want to help stop the issue before they have babies, so they don’t fall victim to the same issues,” Julia said.

With a hugely successful unofficial launch event behind them, the Preemies 4 Prevention team is looking ahead at more ways to get involved and give back.

“This is only the beginning,” Jackie said. “We’re working to guide and support Sage, Julia and the other members of the P4P committee, and it’s been great to see them be so enthusiastic about a cause that’s so personal, not only to our families but for so many others. They’re off and running.”

Though the official launch event is taking place next week, the group already has plans for how it can get even younger kids involved by organizing charity walks and other events.

To learn more about Preemies 4 Prevention or make a donation, please visit: https://www.facebook.com/preemies4prevention/