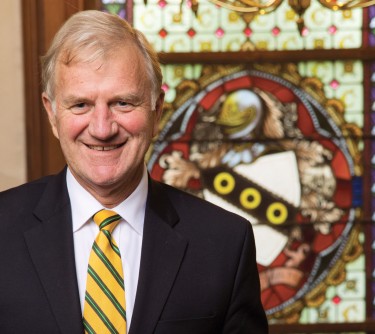 Newswise — WASHINGTON, D.C. – President Barack Obama has announced his intention to nominate Clarkson University President Anthony G. Collins to serve as a member of the Advisory Board of the Saint Lawrence Seaway Development Corporation (SLSDC). The White House news release can be viewed at http://www.whitehouse.gov/the-press-office/2014/05/01/president-obama-announces-more-key-administration-posts .

In the release issued by the White House announcing several key Administration posts, President Obama said, “I am pleased to announce that these experienced and committed individuals have agreed to join this Administration, and I look forward to working with them in the months and years ahead.”

“It is an honor to be nominated to serve in President Obama’s administration and in a capacity so deeply connected to the North Country,” said Collins. “The Seaway is a globally significant strategic asset with unparalleled opportunities to advance and balance international trade, world-class recreation and environmental stewardship.”

The SLSDC headquarters staff offices are located in Washington, D.C., and operations are based at the two U.S. Seaway locks (Eisenhower and Snell) in Massena, N.Y. The locks are less than 35 miles from the Clarkson University campus. The Snell Lock is named in honor of Congressman Bertrand H. Snell for his sponsorship of the original St. Lawrence Seaway Legislation and other contributions to the North Country during his 23-year career in Washington representing New York’s northern border region. Snell was also a Clarkson trustee for 47 years, including 25 as chairman of the Board.

In cooperation with its Canadian counterpart, the SLSDC’s mission is to serve the U.S. intermodal and international transportation by maintaining and improving the deep-draft waterway that contributes to comprehensive economic and environmental development of the entire Great Lakes basin. The SLSDC maintains total assets of $150 million, with plant, property and equipment valued at $112 million as reported in its 2013 Annual Report. Currently serving as Clarkson's 16th president, Collins is a regional and national advocate for higher education - industrial partnerships that couple research discovery and engineering innovation with enterprise for commercialization and economic development with a focus on advancing sustainable energy solutions and environmental technology innovation. New York Governor Andrew Cuomo appointed Collins in July 2011 to serve as co-chair for the North Country Regional Economic Development Council. Collins also serves on the Moreland Commission, established by Governor Cuomo in November 2012 to investigate and study utility companies’ storm preparation and management; and to recommend reforms to overhaul regulation of the entire system to better deal with emergencies.

Collins is the also the president of the Seaway Private Equity Corporation that invests in new technology companies based in St. Lawrence County, New York, and serves on the board for (TSEC) The Solar Energy Consortium, which mobilizes related resources in New York State; and is a member of NYSERDA’s Technology & Market Development Advisory Committee which provides technical and policy guidance to NYSERDA on energy and environmental research and market development initiatives.

In service to the higher education sector, President Collins is the immediate past chair of the National Association of Independent Technological Universities and a chair emeritus of New York’s Commission of Independent Colleges and Universities. In addition, he serves on the boards of the CenterState Corporation for Economic Opportunity and the NYS Business Council.

Growing up outside Melbourne, Australia, Collins earned an undergraduate civil engineering degree from Monash University, and then master’s and doctoral degrees from Lehigh University in Pennsylvania. Prior to his doctoral studies, he worked for both Australian Consolidated Industries and Utah Development Company. After receiving his Ph.D. in 1982, Collins launched his career at Clarkson, in Potsdam, N.Y., as an assistant professor of civil and environmental engineering. Subsequently rising to the rank of professor, he also assumed increasing levels of administrative responsibility, including department chair, dean, vice president for academic affairs, and provost. He was elected the 16th president of Clarkson University in 2003. He has received awards for outstanding teaching, research and advising, lectured globally and is the author of more than 90 professional publications.

Clarkson University launches leaders into the global economy. One in five alumni already leads as a CEO, VP, equivalent senior executive or owner of a company. Located just outside the Adirondack Park in Potsdam, N.Y., Clarkson is a nationally recognized research university for undergraduates with select graduate programs in signature areas of academic excellence directed toward the world’s pressing issues. Its Beacon Institute for Rivers and Estuaries, a subsidiary of Clarkson, is located in Beacon, N.Y. Through 50 rigorous programs of study in engineering, business, arts, sciences and health sciences, the entire Clarkson learning-living community spans boundaries across disciplines, nations and cultures to build powers of observation, challenge the status quo, and connect discovery and engineering innovation with enterprise.