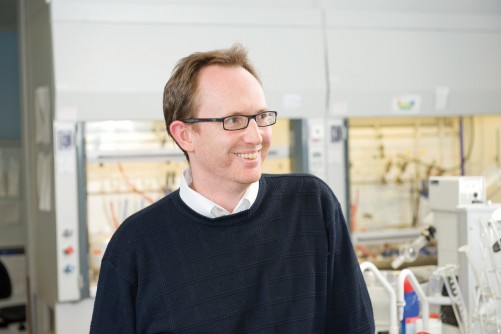 Newswise — The experts took the product from technology demonstration to commercialisation in less than three years.

Originally, the researchers had targeted applications in large scale industrial separations for their new liquid materials but the product is already attracting interest in a number of other applications such as in medical diagnostics and household products.

The project team, which includes experts from the School of Chemistry and Chemical Engineering at Queen’s, along with colleagues at the University of Liverpool, published their initial findings in 2015 but have since been carrying out further research to increase the yield and effectiveness of the porous liquids.

Professor Stuart James from the School of Chemistry and Chemical Engineering at Queen’s University is a co-founder of the new company. He said: “Porous liquids are a new class of liquid materials that contain microscopic cavities or pores, each the size of a single molecule. They contain up to 10,000 times the number of cavities that are found in conventional liquids, and up to around 20 per cent of the liquid is actually empty space – creating new substances with a far greater absorption capacity than the base solvents.

“Thanks to these cavities, porous liquids can absorb large amounts of gas and they can be tuned to selectively absorb one gas over another. The major benefit of porous liquids is that, unlike solids, they can be circulated, meaning that they can be applied in a host of processes. They can be used in continuous flow separations, such as the removal of impurities from natural gas, which currently relies on inefficient and energy-intensive methods.

“Porous liquids could be used as replacements for liquid absorption systems based on conventional liquids, such as amine solutions. Currently, 40 per cent of natural gas reserves are contaminated with impurities that need to be removed but the existing technology for removing the impurities requires large amounts of heat energy. The new material would be much more energy efficient.”

A patent examination process is underway for the core material. QUBIS, the commercialisation arm of Queen’s University, has invested in the new spin out company Porous Liquid Technologies Ltd. which will explore a broad range of technological applications.