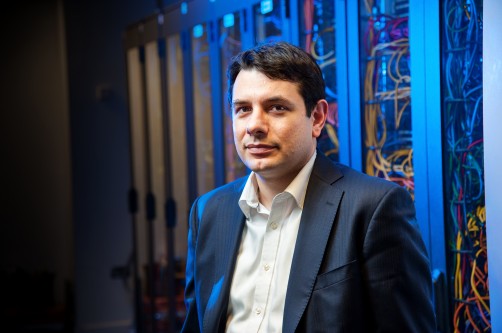 Newswise — Researchers at Queen’s University Belfast are creating ground-breaking computer software which has the potential to develop some of the world’s fastest super computers.

The software, developed by researchers in the School of Electronics, Electrical Engineering and Computer Science at Queen’s, will increase the ability of supercomputers to process masses of data at higher speeds than ever before.

The breakthrough, which comes as part of a major research project between the University of Manchester and the STFC Daresbury Laboratory in Cheshire, has the potential to combat major global issues including climate change and life threatening diseases by simulating detailed models of natural events and then processing new levels of data at greater speed than ever before.

By simulating detailed models of natural phenomena such as ocean currents, the blood flow of a human body and global weather patterns, scientists could use the information they produce to help address some of the big global challenges including sustainable energy, the rise in global temperatures and worldwide epidemics.

The project’s Principal Investigator, Professor Dimitrios Nikolopoulos from the School of Electronics, Electrical Engineering and Computer Science at Queen’s University Belfast, said: “This new software which is known as Exascale computing means that complex computing simulations which would take thousands of years on a desktop computer will be completed in a matter of hours. This research has the potential to give us insights into how to combat some of the biggest issues facing humanity at the moment. It is such an exciting project to be a part of and is further evidence of how Queen’s researchers are advancing knowledge and changing lives.”

Professor Jack Dongarra, from the University of Manchester, said: “This project sheds valuable insight on how to use many core based systems effectively, proving major benefits for a wide range of scientific endeavours that depend on large-scale simulations.”

Queen’s University is one of the UK’s leading research-intensive universities, and has recently been placed in the top ten in the UK for research intensity in the recent Research Excellence Framework assessment exercise.

The SERT project is due to start in March 2015. It will be funded by EPSRC under the Software for the Future II programme, and the project will partner with the Numerical Analysis Group (NAG), Cluster Vision and the Science and Technology Facilities Council (STFC).