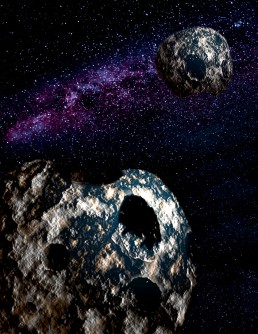 Artist’s conception of a loosely tethered binary planetoid pair like those studied by Fraser et al. in this work which led to the conclusion that Neptune’s shepherding of them to the Kuiper Belt as gradual and gentle in nature. 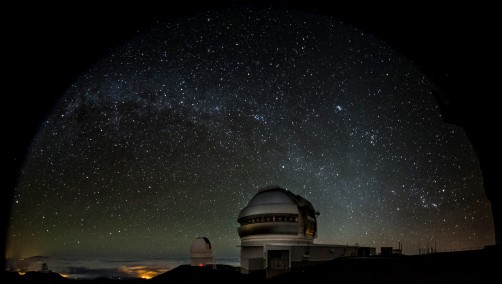 The Gemini North telescope (foreground, right) with the Canada-France-Hawaii Telescope in background (left). Image obtained during observations for Col-OSSOS and both telescopes are pointing at the same target.

Newswise — A Queen’s University Belfast expert has made a major discovery on the formation of icy bodies within the Kuiper Belt, unlocking unique evidence that Neptune’s movement during early planet formation was a “smooth and calm” journey.

The study focused on the Kuiper Belt – a region of space beyond the gas giant Neptune. The area holds more than 1,700 known icy objects, which are remnants of the early Solar System. Normally objects that are formed in this area are red in colour.

However, during his research Dr Fraser identified a small number of ‘oddball’ objects, which stand out as uniquely blue and are zipping around in binary pairs that orbit around each other, like the moon orbits the earth.

Astronomers have always thought that these objects formed in the heart of the Kuiper Belt but Dr Fraser’s findings, which have been published in Nature Astronomy today (Tuesday 4 April), suggest that the blue binaries actually formed in a region much closer to the Sun and were then shepherded by Neptune’s gravitational nudges onto their current orbits in the distant Kuiper Belt several billions of years ago.

Dr Fraser’s research indicates that when Neptune moved from 20 AU to its current location at 30 AU, this was a very slow and calm movement, which allowed the fragile and loosely bound binaries to be pushed out a similar distance to where they are found currently without being disrupted into two separate single objects.

Discussing the significance of the findings, Dr Fraser said: “This research has opened the window to new aspects of understanding the early stages of planet growth. We now have a solid handle on how and where these blue binaries originated.

“There has been some evidence around how Neptune moved outwards to 30 AU. Our hypothesis about how these blue binaries came to be where they are requires that Neptune’s migration was largely a smooth and calm movement.

“This novel programme uses two world-class telescopes: the Gemini-North and Canada-France-Hawaii telescopes, simultaneously. In doing so, we are able to gather comprehensive spectral information spanning the ultra-violet, optical, and near-infrared wavelength ranges. Without this programme and the partners involved, this major research breakthrough would not have been possible.”

Meg Schwamb, astronomer at the Gemini Observatory, commented: “Working closely together, Gemini North and the Canada-France-Hawaii telescopes coordinated their movements to observe the Col-OSSOS Kuiper belt objects at nearly the same time.” “These simultaneous observations on Maunakea allowed us to measure the light from the same side of the Kuiper Belt object, removing one of the main challenges in studying Solar System bodies that rotate.”

Todd Burdullis, QSO operations specialist at CFHT who helped to co-ordinate the observations, commented: “Facilitating the simultaneous observations with the Col-OSSOS team and Gemini Observatory was challenging, but paved the way for a greater understanding of the origins of these blue binaries.

“In tandem, the two facilities observed all the colours of the outer solar system for the Col-OSSOS team.”

The Gemini Observatory provides the astronomical communities in seven partner countries with state-of-the-art astronomical facilities that allocate observing time in proportion to each country's contribution. In addition to financial support, each country also contributes significant scientific and technical resources.

The national research agencies that form the Gemini partnership include: the US National Science Foundation (NSF), the UK Science and Technology Facilities Council (STFC), the Canadian National Research Council (NRC), the Chilean Comisión Nacional de Investigación Cientifica y Tecnológica (CONICYT), the Australian Research Council (ARC), the Argentinean Consejo Nacional de Investigaciones Científicas y Técnicas (CONICET) and the Brazilian Conselho Nacional de Desenvolvimento Científico e Tecnológico CNPq). The observatory is managed by the Association of Universities for Research in Astronomy, Inc. (AURA) under a cooperative agreement with the NSF. The NSF also serves as the executive agency for the international partnership.

The authors wish to recognize and acknowledge the very significant cultural role and reverence that the summit of Mauna Kea has always had within the indigenous Hawaiian community. We are most fortunate to have the opportunity to conduct observations from this mountain.