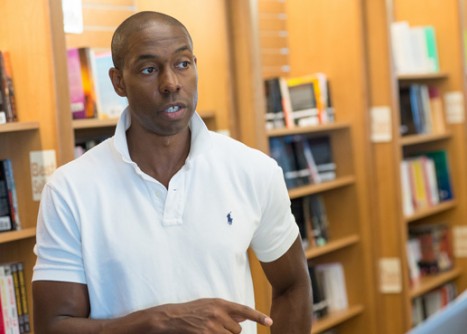 Newswise — As the hashtag #Ferguson trends on Twitter more than a week following Michael Brown’s deadly shooting by a police officer in this suburb of St. Louis, Mo., University of Vermont professor @RashadShabazz was deeply engaged in the conversation. It’s a topic that Shabazz, UVM assistant professor of geography and protégé of renowned activist Angela Davis, understands well -- his current research looks at issues surrounding the policing of black communities, the projection of young black men as criminals and the geographies of race and racism. His latest book,Spatializing Blackness, examining the prisonization of living spaces in Chicago, will be released next year from the University of Illinois Press.

With persistent images suggestive of a war zone in a small American town, and a frenzy of both social and mainstream media reporting the story, Shabazz offers an academic perspective.

Rashad Shabazz: First, even if there was a physical interaction, let’s say Brown pushed the officer, why would he take out a gun and shoot an unarmed man six times? If the officer wanted Brown, he could have done what the police are supposed to do -- run after him or figure out another way to deal with the situation. Even if he had known Brown had been shoplifting, it’s not a justification to gun him down in the street like a dog and leave his body there for hours, a completely unethical and inhumane response to a person’s death. That and the response to his family -- basically saying that their son was a criminal and he got what was coming to him -- helped fuel the kind of anger we’ve been seeing in Ferguson.

And to have police officers with sniper rifles pointed at protestors, heavily armed, with tanks -- what kind of response did they think they were going to get? Policing and militarization are built on hyper-aggressive masculinities, and one of the things that always happens when you show force is that people are going to respond in kind. The protesters weren’t going home. They responded with the same hyper-aggressive masculinity and frustration, and they got locked in combat. I understand the frustration that these young men have, and it’s inflamed when they’re looking at someone holding an assault rifle in full body gear.

If the police and the city wanted to see the protest quelled they should first apologize for his death and acknowledge that something went horribly wrong. And they should see it as an opportunity to restructure their relationship to the community and use it as an opening to rethink what it means to police and to ‘serve and protect.’But they’re not doing that. Police don’t apologize. There’s this belief that if they do wrong they’re supposed to cover it up. They are always in the right. The military functions like this as well, never acknowledging misdeeds, mistakes, outright malice. They need to say, ‘We are sorry. This should not have happened.’

What do you think the media is missing in telling this story?

There have been wonderful stories about the militarization of the police and economic realities, etc., which are valuable, but for me it all rests on this ideology, this belief system, that is implicit in the entire interaction between the cops and the community. If there’s one thing I think the media is missing, that connects all of these stories, it is that Michael Brown is not dead if there’s no belief that he is inherently criminal and that killing black men isn’t a justifiable act. It underlies the Trayvon Martin case, the choking of Eric Garner in New York...the media should have a deep, sophisticated conversation about this.

Black men are America’s boogey men. We are represented as highly criminalized and sort of lascivious -- we are the domestic version of Al Qaeda, the internal boogey men who are going to create terror and harm. And so killing black men -- unarmed black teenagers -- is a consequence of that. And it always gets excused, it gets covered over, it gets explained away and justified. There’s never an apology or productive response or attempt to do any healing or to look at police practice. There’s never any investment in the community or attempt to make sure it never happens. We just move on.

When you have a society that sees black men as a problem, as agents of crime, then the killing of Michael Brown just seems like the right, necessary thing to do because he committed a crime or he was going to commit a crime or he may commit one in the future. That ideology holds huge sway over large swaths of the population, but when it’s manifested through policing, it’s deadly. Brown was shot six times. What other group of people in our society can have an unarmed member killed for shoplifting and have it be explained away? If this were an unarmed white boy that was shot down and left on the street, the response would have been very different. But white boys shoplifting are not going to be gunned down, especially not by a black police officer. A black police officer would be going to jail for the rest of his life most likely.

What is the impact of having a majority white police force in a largely black community?

This is something that black communities across the nation deal with, and it goes far beyond that. In black communities there are several levels of prison or carceral power, basically mechanisms of policing, surveillance and containment that are focused in on the geographies that black people live in. You see this in urban communities all across the nation in Los Angeles, New York, Houston -- high levels of policing that focus on very specific neighborhoods, with police walking around, and precincts being set up in those neighborhoods which produce high levels of incarceration. But wherever you put police you are going to find crime. Black people don’t produce crimes out of their proportion. They are policed out of their proportion.

Wherever you put police officers, you’re going to find more criminal activity because they can see it, particularly if it happens on the street. So when you place high levels of policing in black communities like Ferguson, or the south side of Chicago, it’s going to generate more arrests and those arrests cycle people in and out of prison and they have massive consequences on the family, the economy, the political reality of the neighborhood -- all of these factors are something that many poor and working class black communities are confronted with.

Do you see any hope for change?

It’s hard as long as policing holds a power spot within American politics -- no one wants to be soft on crime, and black people and poor people are going to continue to be the target because it’s easy. They have no political authority; there’s a belief that they’re inherently criminal, so doing misdeeds to this community goes unpunished. It’s going to continue because the places where poor people live are heavily policed. Poor whites are heavily policed, poor Latinos, poor blacks... poor people can be exploited, and police are the agents that can exploit them in the most violent way -- arresting, accosting, humiliating, killing.

Change has to be about defunding policing on some level. Our schools are falling apart, our bridges are crumbling underneath us, our infrastructure is falling apart, but we have yet to slash corrections and police budgets. Where are our priorities? Almost all 50 states give more to policing and corrections than they do to education. That says to people, you can have a prison bed and three meals a day but as far as education, you’re going to have to take out loans, your high schools may not be that good, and your grade schools might be so-so, but there’s plenty for you in the department of corrections.

Will you be using this case in your classes?

We’re going to be talking about this on the first day. I’m teaching "Race and Ethnicity in the U.S." and "Race Geographies." In both classes we look at policing and incarceration. We’ll be exploring the statistics around it and also getting at this larger ideological context that’s running under all of those things. We’ll spend a lot of time on that because it means getting students to understand what ideology is, how it works, and how we’re all subject to it. The only people that exist outside of ideology are corpses. If you have blood running through your veins and you’re breathing, then you’re subject to it. It’s not bad -- it can be productive. But here’s a case where these ideas that are rampant in society caused a young man’s death. They shaped the interaction between him and that cop. So I try to spend time with my students getting them to understand how we all participate in the ideology that runs throughout the culture.