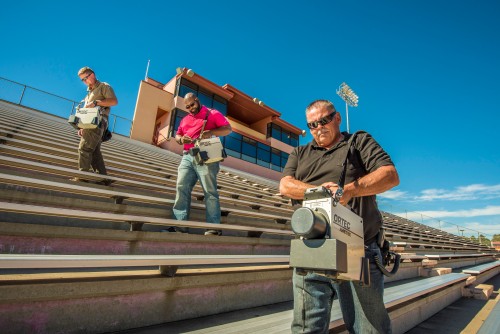 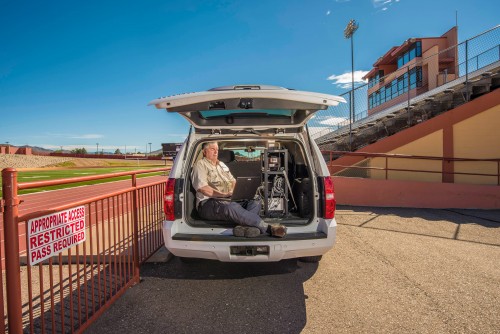 Newswise — ALBUQUERQUE, N.M. — Richard Stump has been to five Super Bowls and hasn’t seen a single pass, run or touchdown.

As sentries scanning the crowd at these events, RAP provides technical expertise to respond to radiological or nuclear threats. In fact, members of Sandia’s RAP team supported this year’s Republican and Democratic national conventions.

Sandia’s RAP team and partner teams at Los Alamos National Laboratory, the Waste Isolation Pilot Plant and the Pantex Plant in Amarillo, Texas, provide radiological detection support for large public events in Kansas, Oklahoma, Texas, New Mexico and Arizona. They also help with major public events around the U.S., such as Super Bowls or visits from the pope.

Preventive radiological and nuclear detection is using the right detector systems and processes to prevent someone from using radioactive material as a weapon to hurt people or damage property, said Stump. “The last thing you want to have happen is somebody getting close enough to a stadium and manage to contaminate a lot of people. People exposed to even the smallest amount of radioactive material would be panic-stricken, even if they aren’t hurt by the initial incident.”

Other events supported by the Sandia RAP team in the past include the Tucson Gem & Mineral Show, Albuquerque Balloon Fiesta, Oklahoma City Memorial Marathon, political conventions, presidential inaugurations and many major sporting events.

“Being able to provide that layer of security for these events, and provide a level of expertise in interpreting what’s going on, is something that I have pride in. Anybody can get a radiation detector and take a measurement, but we can interpret what it means and advise on a response. Without us you would run the risk of things being misinterpreted as safe when they might not be, or vice versa,” said Hans Oldewage, who recently took over for Stump as regional contractor response coordinator.

First responders across the Southwest

In addition to several planned events each year, RAP team members are on call as first responders to assist federal, state, tribal and local governments for incidents involving radiological materials.

One day, they might be called out because someone finds an object with radioactive markings while cleaning out an attic; the next day they could be responding to an accident involving a vehicle transporting containers of radioactive material or safely unsticking a lethal radiation source at a national lab. Only a few of those happen each year, but they can happen at any time or anywhere in the five-state region.

“It takes a certain mindset to do emergency response and be on call 24 hours a day, seven days a week. Since you never know when you’re going to get called out, we understand if sometimes somebody can’t go. But over the years, I’ve seen people give up kid’s graduations, Christmases and birthday parties,” Stump said. “Not once in the history of the program have we ever not been able to respond to an incident that we were called out for.”

His teammates’ willingness to drop everything and respond fills Stump with pride. He’s quick to add that he has the same respect for firefighters, police officers and other traditional first responders who answer emergency calls every day.

Training around the globe

In 1994, the DOE asked Sandia’s RAP team to put together a standardized weeklong training program for all RAP responders nationwide.

In the two decades since, Sandia’s RAP team, with assistance from other teams, has developed the Radiological Assistance Program Training Emergency Response (RAPTER) class and leads three or four trainings each year. The class started in Fort Chaffee, Arkansas, and later moved to Albuquerque.

A spin-off is the international RAPTER class, in which Sandia helps to train more than 1,000 first responders worldwide from China, South Africa, the African nation of Djibouti and more than 50 other countries. The training can be specialized for port and customs officials or for major public events, such as the Olympics or the World Cup.

Sandia’s RAP team also trains local and state first responders how to use radiation detectors to locate and identify sources of radiation.

Between trainings, public events and accidents, RAP team members miss a lot of weekends at home and can be away from work and family for weeks at a time. “The biggest thrill is when you get to the end of the event and nobody was hurt. They’ve enjoyed the Super Bowl or World Series and they’re going home happy and you’re going home happy because nothing bad has happened,” Stump said. “But just the fact that we’re out there and help ensure nothing happens, that is probably the most significant high point that you get.” 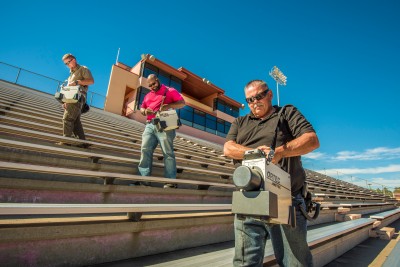 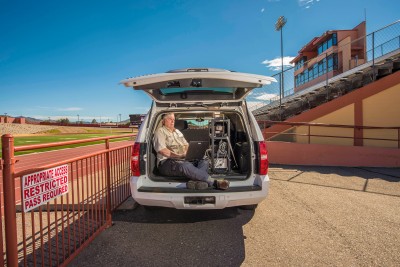