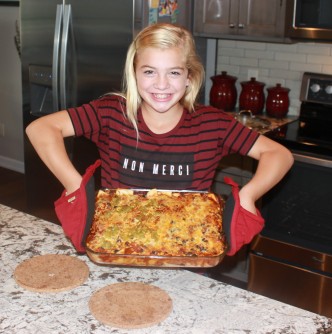 Sarah Dunn, of Brandon, South Dakota, makes her family's favorite dish, enchildas. She and her parents are still using the lessons they learned from iCook to prepare health meals and enjoy them at family mealtime. 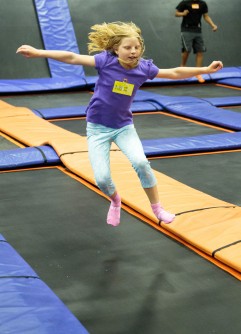 Newswise — Roasted vegetables, fruit salads and spinach smoothies can form the basis for a healthy meal and provide a chance to connect as a family. These are insights that 9- and 10-year-olds and their caregivers gained through the iCook 4-H program.

“I learned how to make a bunch of healthy foods and how to stay healthy,” said Sarah Dunn of Brandon, adding that she steamed vegetables and made spinach smoothies that “actually tasted good.” Though they completed the curriculum more than a year ago, Sarah’s parents, Jeff and Julie Dunn, said they still use what they learned. Mealtime conversations now start by saying “tell me two good or not-so-good things about your day,” rather than asking “how was school?” explained Julie.

“It’s about trying to get some face time,” Jeff added.

The iCook program seeks to increase culinary skills, family mealtime and physical activity as a means of preventing childhood obesity, according to professor Kendra Kattelmann, director of the didactic program in dietetics at South Dakota State University.

Kattelmann is the state’s lead on the U. S. Department of Agriculture project, which involves four other land-grant institutions—University of Maine, West Virginia University, University of Tennessee and University of Nebraska-Lincoln. The five-year National Institute of Food and Agriculture project began in August 2012. Learning by DoingSDSU Extension nutrition assistants and 4-H advisers at two sites—Sioux Falls and Sisseton—recruited participants and taught the six two-hour iCook lessons over a 3-month period in fall 2013. Eight child-caregiver pairs in Sisseton and 18 in Sioux Falls received instruction as part of the intervention group. Each lesson has a nutritional component tied with the cooking lesson and a physical activity, such as playing a game, according to Kattelmann. “The lessons talk about better choices, healthier choices.”

Cindy Borg, who accompanied her granddaughter, Brianne Noethlich, said, “I underestimated how well she could do in the kitchen.”

To measure physical activity, 25 percent of the intervention group wore accelerometers for a week prior to and four months into the program. When it comes to helping children become more active, graduate student Chase Merfeld said, “Parents are agents of change.”

However, Merfeld found that decreasing children’s sedentary behavior and increasing moderate to vigorous physical activity will require a more intense intervention than iCook. Creating lifetime habitsResearchers used an interactive website to keep participants connected after the lessons were completed, Kattelmann explained. Each family received a mini-video recorder and instructions on how to upload videos and photographs to the website to share how they met weekly or monthly challenges, such as eating a seasonal vegetable or doing a yoga pose.

The curriculum has been expanded to eight lessons, in part to increase participants’ proficiency with the website and will eventually be available to all those in 4-H and Extension who work with nutrition education.

Helping children and their caregivers gain confidence in their ability to make healthy food choices and to prepare meals will help prevent obesity, Kattelmann explained. “It’s about reinforcing parenting through cooking.” 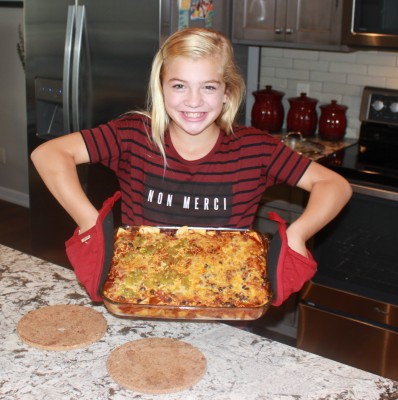 Caption: Sarah Dunn, of Brandon, South Dakota, makes her family's favorite dish, enchildas. She and her parents are still using the lessons they learned from iCook to prepare health meals and enjoy them at family mealtime. 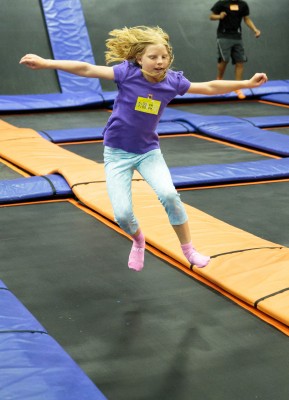