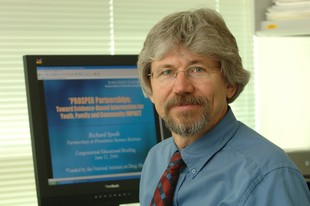 Dick Spoth, director of Iowa State's Partnerships in Prevention Science Institute, was a featured speaker on substance abuse prevention at a conference in Vienna, co-sponsored by the United Nations Office on Drugs and Crime and the World Health Organization.

Richard Spoth, director of the (PPSI) at Iowa State, and Max Guyll, ISU assistant professor of psychology, presented that message to substance abuse experts representing approximately 100 countries at a conference in Vienna, Austria, co-sponsored by the United Nations Office on Drugs and Crime and the World Health Organization back in December.

"We showed how prevention can be particularly economically beneficial," Spoth said. "The presentation began by reviewing the evidence on the cost effectiveness and the return on the investment -- or cost benefits -- of prevention programs. I also did a second presentation on the scientific advances and positive outcomes of family-focused prevention, illustrated by our own research."

The ISU researchers applied their own and national data to calculate both the cost effectiveness and cost benefit for two of PPSI's intervention programs -- Iowa Strengthening Families Program (ISFP), which works on the family level to prevent substance abuse; and the Life Skills Training Program (LST), which was designed for school-based implementation. Spoth defines cost effectiveness as the cost to achieve a particular outcome -- such as the prevention of an alcohol use disorder -- while the cost benefit assesses whether savings generated by prevention are greater than costs spent on prevention.

"Effective and efficient prevention promises to save possibly billions of dollars per year, provided we can learn how to effectively implement it on a larger scale," Spoth told the conference.

Iowa State was the only American university that had a presenter invited to speak on the topic of prevention. Spoth, who received a commendation from the director of the National Institute on Alcohol Abuse and Alcoholism last year for his prevention work, was also the only expert asked to present twice at the conference.

"I spoke with people there who were very interested in doing family-focused prevention programming, which is evidence-based, in their countries," Spoth said. "Some of them are developing these vast infrastructures, devoting extensive resources. I received a number of requests where they wanted me to get involved in some way with a group that was working on a large scale implementation of prevention programming in their country."

Spoth reports that his conference appearance generated requests from Chile, India, Indonesia, Senegal and a number of other countries for consulting assistance as they implement intervention programs -- possibly modeled after the ones he's successfully implemented through PPSI.

He's also been asked to participate in the meetings by the International Narcotics Control Board, located in Vienna, to work with them to produce their annual report.

"They evaluate international substance issues in depth," Spoth said. "What they would want me to address is the state of the art in effective prevention worldwide."