Research Application for the 21st Century: A Video for Every Scientific Article 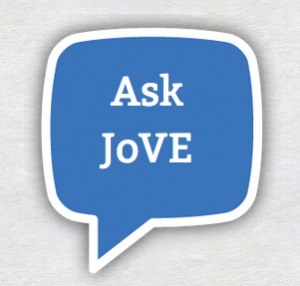 JoVE — The Journal of Visualized Experiements

A new application from JoVE introduces video-demonstrations to all scientific articles online.

Named the Ask JoVE button, this new web application, or bookmarklet, generates a collection of peer-reviewed videos demonstrating the techniques used in a given scientific paper. It offers researchers the opportunity to watch the crucial components of a procedure, thereby reducing experimental error and the time it takes to learn the experiment.

"We created this new feature because we want to visualize all the science literature in the world," said JoVE’s CEO, Dr. Moshe Pritsker, "For every science article you read, click on the Ask JoVE button and immediately see videos of experiments related to this article, filmed at the best university labs."

For practicing scientists like Dr. Carrie Northcott, formerly a principal investigator at a Pharmacology and Toxicology laboratory at Michigan State University, learning scientific procedures through video demonstrations is more effective than traditional methods. Her lab used a JoVE video demonstrating catheter implantation to train incoming students and researchers on the technique.

“Initially it took multiple tries, multiple efforts, whereas now when we teach this technique with the video we have between a 90 to 100 percent success rate,” said Dr. Northcott. She and a former graduate student of hers compared this to a success rate of approximately 40% prior to using the video.

Dr. Pritsker co-founded JoVE in 2006 after discovering, first hand, the problem of low-reproducibility facing scientific research. “As every bench scientist knows, it is very difficult to repeat biological experiments based on their text description in traditional scientific journals,” he said, “This is because the text format presents a requirement for scientists to understand the complex reality and numerous small details of the experiment from reading.”

By bringing video to the mass of traditionally formatted scientific articles online, the Ask JoVE button is in line with JoVE’s mission to increase the reproducibility of scientific research. “This will tremendously increase productivity of research in academia and biotech industry, accelerating development of new technologies and drug discovery,” said Dr. Pritsker, “This will also have a strong impact on scientific education and science policy at all levels.”

The Ask JoVE button is available as a free download at www.AskJoVE.com, and it is easily installed on both Mac and PC computers.