Newswise — Squid have always been considered poor parents: they lay their eggs on the seafloor and leave them to develop on their own. But a University of Rhode Island scientist has made the first observation of parental care by squid when he used a remotely operated underwater vehicle in the deep sea to watch as five squid each carried thousands of eggs in their arms.

The observations made in Monterey Canyon off California in 2000 and 2002 are reported in the Dec. 15 issue of the journal Nature.

"Our finding is unexpected because this behavior differs from the reproductive habits of all other known squid species," wrote Brad Seibel, a URI assistant professor of biological sciences who collaborated with colleagues at the Monterey Bay Aquarium Research Institute on the discovery.

Gonatus onyx is one of the most abundant species of squid in the Atlantic and Pacific Oceans, but because it spawns at great depths it has been difficult to observe its reproductive behaviors.

Spectacular video and photographic images captured by Seibel show the squid transporting a tubular pouch of some 2,000 to 3,000 eggs attached to hooks under its arms. After several months, the mature eggs break away from the pouch and hatch before setting out on their own.

According to Seibel, repeated extension of the squid's arms appeared to be an intentional effort to flush water through the eggs to aerate them in the oxygen-starved waters found at depths of 5,000 to 7,000 feet off California.

Seibel's discovery was also unexpected because it was thought that the arm and mantle muscles of squid deteriorate soon after sexual maturation, rendering the adult squid incapable of carrying its eggs. Seibel said this may still be somewhat true, because the squid he observed were unable to swim as efficiently as unencumbered ones, making them more likely to be preyed upon by whales and seals. 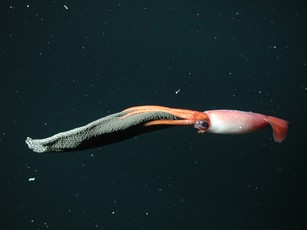 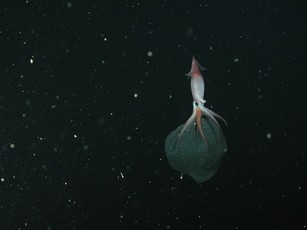