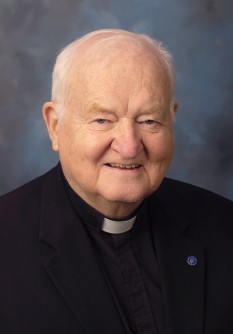 Rev. O'Rourke, a Dominican priest and canon lawyer, was a leader in promoting respect for the wishes of patients and their families who do not want burdensome treatments at the end of life.

Rev. O’Rourke was the founding director of the Center for Health Care Ethics at St. Louis University from 1979 to 1999, and finished his career as a lecturer at the Neiswanger Institute for Bioethics and Health Policy, Loyola University Chicago Stritch School of Medicine. "Due to his vast knowledge of Catholic moral and canon law traditions, Father O'Rourke was consulted by the involved parties in virtually every major controversial case in recent years in Catholic health care," said Neiswanger Institute director Mark G. Kuczewski, PhD.

For example, Rev. O'Rourke was consulted in the 1990 Supreme Court case involving Nancy Beth Cruzan, who was left in a vegetative state following an auto crash. The landmark case established the legal right of patients to refuse all medical treatments, including artificial nutrition and hydration.

Rev. O'Rourke wrote more than 100 scholarly articles on such issues as genetic testing, surrogate decision making and physician-assisted suicide. He is perhaps best-known for his textbooks, especially Health Care Ethics: A Theological Analysis, which he co-authored with the Rev. Benedict Ashley. David O’Rourke was born in 1927 in Park Ridge, Il. He graduated from Fenwick High School in Oak Park, Il. in 1945. He played three years of football before injuring his back his senior year, when he managed the freshman football squad. He was also editor of the yearbook and president of Confraternity, and later served on Fenwick's board.

He attended Notre Dame University for two years and served in the U.S. Navy before entering the Dominican Order in 1947. He was ordained in 1954 and took Kevin as his Dominican name, by which he was publically known the rest of his life. He received his JCD (Juris Canonici Doctor) from St. Thomas University in Rome in 1958. He also earned a STM (Master of Sacred Theology) degree given in the Dominican Order after successfully teaching and writing for many years.

Rev. O’Rourke was considered a theological conservative because he rooted his views within the Catholic ethical tradition and remained true to the teachings of the magisterium of the Church.

He began his career as an academic bioethicist in 1958 at Aquinas Institute of Philosophy and Theology in Dubuque, Ia. He was dean of the institute from 1969 to 1972.

Following the 1973 landmark Roe v. Wade decision, Rev. O’Rourke went to work for the Catholic Health Association USA. At the time, Catholic hospitals were worried the federal government might require hospitals to offer abortion services in order to participate in Medicare. Rev. O’Rourke helped develop a Catholic response to such a possibility. (As it turned out, no such mandate was issued.) Rev. O'Rourke was a well-known supporter of the core teachings of Humanae Vita, the 1968 papal encyclical which outlines Roman Catholic teachings on reproductive matters such as birth control and sterilization. Rev. O’Rourke helped develop applications of the theological “principles of cooperation” so that providers at Catholic facilities implemented safeguards to keep an appropriate moral distance from performing ethically questionable actions.

Rev. O'Rourke was at Loyola's Neiswanger Institute from 2000 to 2012. While there, he continued to write about forgoing artificial hydration and nutrition at the end of life. Rev. O’Rourke interpreted all care in terms of the classic distinction in Catholic moral theology between ordinary and extraordinary care. Rev. O’Rourke held that when a patient is terminally ill, or the trajectory toward death is clear, the patient may decline potentially death-delaying treatments -- including a respirator, artificial nutrition and hydration -- based on weighing the burdens and benefits of these treatments.

Because of his clear exposition of this traditional doctrine, Rev. O’Rourke often was strongly criticized by some pro-life advocates who believed the Church’s teaching entails "vitalism" regarding end-of-life decisions.

Rev. O'Rourke received many honorary degrees and awards for his writings and service to Catholic health care.

Rev. O'Rourke's seven siblings preceded him in death. He is survived by many nieces, nephews, grand nieces and grand nephews. Visitation will be held at Saint Vincent Ferrer Church, 1530 Jackson Avenue, River Forest, Il. on Monday, April 2, from 5 p.m. to 7 p.m. A funeral mass will be celebrated at 10 a.m. Tuesday at St. Vincent Ferrer.

Memorial gifts may be made to the Ashley-O’Rourke Faculty Chair Fund in Health Care Mission at the Aquinas Institute of Theology, c/o Dominican Friars, Province of St. Albert the Great, 2005 S. Ashland Ave., Chicago, IL 60608. The purpose of the fund is “to promote teaching, Catholic Health Care and Ethics.”