27-Mar-2012 9:00 AM EDT, by Rutgers University's Office of Research and Economic Development 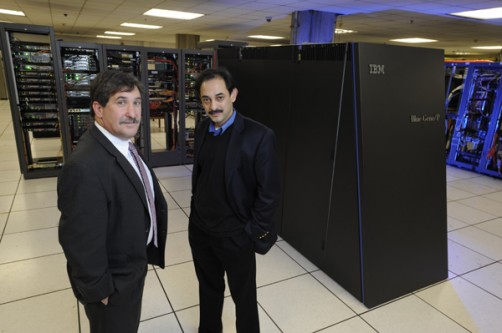 Newswise — NEW BRUNSWICK, N.J. – Rutgers today formally launched a high-performance computing (HPC) center at the university focused on the application of “Big Data” analytics in life sciences, finance, and other industries. The center is aimed at improving the economic competitiveness of New Jersey’s public and private research organizations.

The HPC center will be part of the newly created Rutgers Discovery Informatics Institute (RDI2) and will utilize supercomputing equipment and software provided by IBM in the project’s first phase. Rutgers anticipates future expansion of the center will lead to the university having one of the world’s most powerful academic supercomputers.

The institute, powered by an IBM Blue Gene®/P supercomputer, has several goals.• Creating an HPC resource, with expert support, for industry in New Jersey and the surrounding region• Educating the New Jersey workforce and Rutgers students in working with advanced analytics and a state-of-the-art HPC center• Providing HPC resources to Rutgers faculty members and regional organizations, who are expanding their use of extremely large data sets

“There is immense potential here because Rutgers and IBM have some of the best minds in high-performance computing,” said Michael J. Pazzani, vice president for research and economic development and professor of computer science at Rutgers. “The ability to conduct data analysis on a large scale, leveraging the power of ‘big data,’ has become increasingly essential to research and development.”

“Just as important is the valuable new resource that we are creating for industry,” Pazzani said. “The Institute will collaborate with businesses that need high-performance computing capabilities but can’t justify the cost of building their own system.”

The collaboration involving Rutgers and IBM scientists and engineers is expected to extend beyond computer science and engineering, to encompass fields such as cancer and genetic research, medical imaging and informatics, advanced manufacturing, environmental and climate research, and materials science. “The application of analytics to ‘big data’ has quickly emerged as the new foundry of the 21st century economy,” said Phil Guido, IBM general manager, North America. “IBM is eager to work with Rutgers to help improve New Jersey’s economic competitiveness through this center. IBM firmly believes that public-private collaboration and research can be critical in ensuring our workforce is equipped and empowered with next generation skills like analytics.”

The IBM Blue Gene supercomputer, housed in the Hill Center for Mathematics on Rutgers’ Busch Campus in Piscataway, will be the only supercomputer available to commercial users in the state. Only eight of the nation’s 62 scientific computation centers have industrial partnership programs. The two Blue Gene/ P racks at Rutgers will be far more powerful than any computer at the university today. “Excalibur” is the name Rutgers has chosen for it, playing off the university’s sports mascot, the Scarlet Knight.

Rutgers has agreed to purchase hardware and software from IBM, as well as entering into a three-year maintenance agreement for the equipment. . As future funding becomes available, Rutgers expects to add the latest-generation Blue Gene/Q system by the end of the year. Rutgers also envisions building an expanded facility on the Busch campus in 2013 as the system and center grows.

Blue Gene is among the world’s leading supercomputer technologies. The Blue Gene/P system is operating in six U.S. locations, including four national laboratories and two universities. IBM is the leading manufacturer on the list of the world’s top 500 most powerful computer systems, holding the most entries.

Manish Parashar, professor of electrical and computer engineering at Rutgers, is the university’s lead faculty member on the project and will direct the new institute. He said: “There is a strong correlation between having this level of sophisticated research infrastructure and research productivity. It will enable research at a scale we could not support at Rutgers before and allow students and industry to have access to HPC to a much greater degree. And this installation is the first step in creating a large-scale infrastructure at the institute, so it’s a huge milestone.”

Parashar is director of Rutgers’ Center for Cloud and Autonomic Computing and the Applied Software Systems Laboratory, and associate director of the Center for Information Assurance. He was program director of the National Science Foundation’s Office of Cyberinfrastructure, where he managed an approximately $150 million research portfolio, from 2009 to 2011.

“HPC is a real need because large-scale data is now central to all sciences and engineering,” Parashar said. “Science is changing dramatically, becoming very computation and data-intensive. Large-scale computing is now critical for scientists to address research challenges in diverse fields from biochemistry and genomics to material sciences and climate modeling.”

Margaret Brennan-Tonetta, associate vice president for economic development, has been working with Parashar to launch the Rutgers Discovery Informatics Institute.

“We intend to develop a premier center that sets a new standard for industry collaboration in high-performance computing,” Brennan-Tonetta said. “The institute will be engaging business and provide a valuable resource that goes far beyond hardware and software, offering real expertise and assistance. Industry will be able to come here with a problem involving data analysis and our experts will help them develop a solution.”

Two industrial advisory panels for the RDI2 are being formed, one for large-scale computation and data analytics in finance and a second for the healthcare and life sciences industries. The initial meetings of each are set for April.

The Office of the Vice President for Research and Economic Development promotes excellence in research at Rutgers. Research is fundamental to the university’s overall mission and enhances its education and service missions. Research also contributes to economic development. Rutgers increasingly is engaged in commercialization of research through the transfer of new technologies to industry, contributing to economic development in New Jersey and nationally. From the discovery of streptomycin — the first cure for tuberculosis — to the technology behind Ask.com, Rutgers continues to make a tremendous impact in the commercial world.