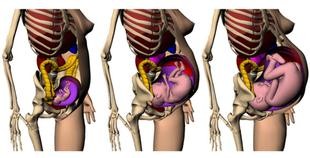 Researchers at Rensselaer Polytechnic Institute have developed new modeling tools that will enable more effective cancer treatment and imaging procedures for pregnant women. These finalized models, from left to right, represent a woman who is three months, six months, and nine months pregnant. The models were plotted with the design program Rhinoceros.

Newswise — Developing fetuses are extremely sensitive to radiation, which poses an impossible dilemma for expecting mothers in need of screening or treatment for cancer. Now researchers from Rensselaer Polytechnic Institute have developed a new set of modeling tools that could enable safer, more accurate, and more effective radiation therapy and nuclear medicine imaging procedures for pregnant women.

Radiation is a doubled-edged sword: It holds the power to cure cancer, but if used improperly it can also cause serious damage to the human body. The situation is even more critical with pregnant females, as any errant radiation could severely harm and impede the growth of the fetus. "The human body is a particular challenge to model because of its wide variety of organs, each with a complex and unique shape," said X. George Xu, professor of nuclear and biomedical engineering at Rensselaer, who is leading the project. "Pregnant females are even more difficult to model using current methods, so we took an entirely new approach."

Physicians use advanced computer simulations to determine the correct dose of radiation to administer to patients. These computer simulations are based on sophisticated virtual models of the human body. About 30 of these models, sometimes called "phantoms," have been developed worldwide.

The data needed to build such models, however, requires extensive X-rays and computed tomography scans. Since pregnant patients are prohibited from undergoing X-rays or other imaging procedures, there has never been enough data to create an accurate phantom of a pregnant woman.

"These new models should be extremely useful for understanding the risks of radiation, and for better planning radiation imaging and treatment for pregnant women," Xu said. "The tools we have developed for this research should also open up several new avenues for improving the field of radiation dosimetry."

Conventional methods of phantom creation simply cannot account for the rapid changes of a pregnant woman's internal physiology as her organs shift to accommodate the growing fetus. So instead of employing the conventional constructive solid geometry (CSG) tools to construct the computer model, Xu and his team turned to boundary representations (BREP) tools. CSG models are based on building and connecting simple shapes such as spheres, cones, and cylinders to create a larger structure.

BREP is more flexible and features a more robust toolbox for manipulating the surface of model components. BREP is widely used in the manufacturing industry for computer-aided design , and in the entertainment industry to create computer-animated models for movies and video games, Xu said. As it turns out, BREP software is also highly effective for creating medical phantoms consisting of complex organs.

Using this new set of tools, Xu and his team created three 3-D models of pregnant females at various gestational stages: three months, six months, and nine months. The team built the models of the expecting mother and fetus organ by organ, relying on computer-generated mesh models, as well as supplanting the model with data from rare CT scan images of a pregnant patient. The images were taken around 2004 in an upstate New York hospital, in a situation where both the woman and her physician were unaware she was pregnant. The existence of such scans was publicized, and Xu contacted the physician to obtain copies of the scans.

Xu said BREP turned out to be extremely effective for modeling the complex topology of human organs, and he expects the practice to catch on.

"We are convinced that it would have been impossible to develop such a complete, consistent, and anatomically realistic set of models from medical images that are hard to come by," Xu said. "It is clear that the current trend will continue to involve BREP type of modeling."

The research project, funded by the National Cancer Institute, was presented in the article "A boundary-representation method for designing whole-body dosimetry models: pregnant females at the ends of three gestational periods " RPI-P3, -P6, and -P9," published in the most recent issue of the journal Physics in Medicine and Biology.

With the models complete, Xu and his team will share their data with other researchers investigating the same topic. Xu said it will likely be about one year before the models are verified and accepted by the medical community, and then integrated into computer software as a new standard for determining and administering radiation therapy to expecting mothers.

Co-authors on the paper include Rensselaer nuclear engineering and engineering physics graduate student Juying Zhang, and postdoctoral research associate Valery Tarenenko. Chengyu Shi, of the Cancer Therapy and Research Center in San Antonio, Texas, is also listed as a co-author.

Xu has led the creation of several different phantoms. For more information on his work, visit the Rensselaer Radiation Measurement & Dosimetry Group at: http://RRMDG.rpi.edu

Physics in Medicine and Biology