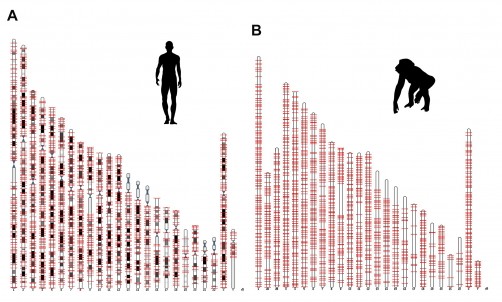 Salk researchers discovered a new genetic component, called ORF0, spread throughout the DNA of humans, chimps and most other primates. This image shows the locations of the ORFO on human and chimp chromosomes. 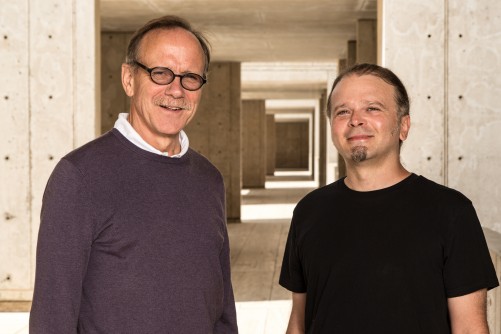 Newswise — LA JOLLA--Scientists have discovered a previously unknown wellspring of genetic diversity in humans, chimps and most other primates. This diversity arises from a new component of itinerant sections of genetic code known as jumping genes.

In a paper published October 22, 2015 in Cell, Salk scientists report finding human and chimp DNA peppered with sequences of genetic code they’ve dubbed ORF0, which spreads throughout the genome on jumping genes. The ORF0 sequences may produce hundreds or even thousands of previously unknown proteins.

The abundance of ORF0 instances in the human genome suggests that it played—and still plays—an important role in evolutionary diversity and flexibility by serving as a mechanism for generating novel proteins. The discovery of these mobile protein factories may also shine light on the origins of genetic mutations responsible for cancer, mental disorders and other diseases.

“This discovery shows that jumping genes are an even more important source of variation in the primate genome than we thought, whether you’re looking at the level of different species, different people or even the different cells within an individual’s body,” says Rusty Gage, senior author of the paper and a professor in Salk’s Laboratory of Genetics.

With the sequencing of the human genome, it became clear that jumping genes—mobile genetic elements first discovered in maize by Barbara McClintock in the early 1950s—were also present and highly active during human evolution. About half of the human genome resulted from sequences of genetic code that moved or insert extra copies of themselves throughout the genome.

The evolutionary importance of jumping genes was highlighted by the results of another recent study by Gage and collaborators at Stanford. The research used stem cell technologies developed in Gage’s lab to explore how differences in gene expression contribute to human and chimp facial structure. The findings, also reported in Cell, suggested that jumping genes played a role in the evolutionary split between humans and other primates.

In the more recent study that uncovered ORF0, Gage and his colleagues focused on a class of jumping genes known as LINE-1 elements, which make up about 17 percent of the human genome. These elements contain all the necessary genetic machinery for moving themselves and other classes of jumping genes, unaided, to elsewhere in the genome.

Previously, it was thought that LINE-1 elements contain just two sequences that coded for proteins, the ultimate product of genes that serve a wide range of roles in our cells and organs. These sequences are known as open reading frames (ORF), and the two previously known sequences, ORF1 and ORF2, are thought to be involved in producing proteins that are important for allowing LINE-1 elements to move around in the genome.

In their new study, Gage and his colleagues discovered a third open reading frame. They named it ORF0 based on its location in the LINE-1 element next to ORF1. The scientists found ORF0 in about 3,500 locations in the DNA of humans and about 3,000 locations in the chimp and most other primate genomes.

The structure of LINE-1 elements is such that when an element moves to another site there is a possibility that the ORF0 sequence can blend with genetic sequences in new location in DNA. The result of the new gene sequences can be a new protein. Evolutionarily speaking, this represents a way to generate entirely new molecules that could be beneficial to a species. On the other hand, the reshuffling of an existing ORF0 sequence during a jump could result in a disease-causing mutation.

“This discovery redraws the blueprint of an important piece of genetic machinery in primates, adding a completely new gear,” says Ahmet Denli, a staff scientist in Gage’s lab and the first author on the paper reporting the findings. “Jumping genes with ORF0 are basically protein factories with wheels, and over the eons evolution has been driving the bus.”

Now that they have identified ORF0 in the primate genome, Denli says they plan to determine how many of the instances of ORF0 actually code for proteins and to investigate what function those proteins serve.

The researchers also plan to investigate the behavior of ORF0 in different cell types and diseases. They are particularly interested in exploring its role in cancers and in neurological disorders such as schizophrenia, where previous studies have suggested jumping genes may be involved.

The research was supported by the Leona M. and Harry B. Helmsley Charitable Trust, the JPB Foundation and the G. Harold and Leila Y. Mathers Charitable Foundation.

About the Salk Institute for Biological Studies: The Salk Institute for Biological Studies is one of the world's preeminent basic research institutions, where internationally renowned faculty probes fundamental life science questions in a unique, collaborative, and creative environment. Focused both on discovery and on mentoring future generations of researchers, Salk scientists make groundbreaking contributions to our understanding of cancer, aging, Alzheimer's, diabetes and infectious diseases by studying neuroscience, genetics, cell and plant biology, and related disciplines. 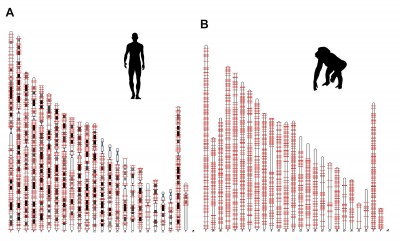 Caption: Salk researchers discovered a new genetic component, called ORF0, spread throughout the DNA of humans, chimps and most other primates. This image shows the locations of the ORFO on human and chimp chromosomes. 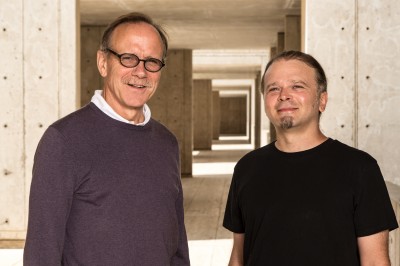