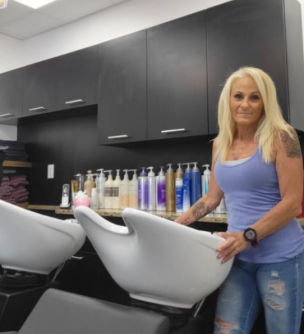 Barbara Willock at her salon.

A Salon Assistant for 25 years, Barbara Willock not only rescues her clients from bad hair days - she also looks to save their lives.

“Many skin cancers go undetected because they are located in places that people might not see, like on their scalp, behind their ears or the back of their neck,” says Willock and she ought to know. “My first skin cancer was a tiny spot on my back,” she explains. Thankfully it was detected early enough for the 59 year old to receive treatment but it was also the first of dozens of basal cell carcinomas and squamous cell carcinomas - both skin cancers - that Barbara’s dermatologist found on her since she began regular skin cancer screenings in 2015.

“I loved to go for tanning in my 20’s and 30’s, I used to go up to 4 times a week and I never used sunblock,” says Barbara who admits, she’s now paying the consequences. “Most recently, part of my eye brow had to be removed because of skin cancer. I don’t go in the sun at all today without wearing a large brimmed hat and protective clothing.”

“One of the non-surgical treatments that a lot of people may not know about is a topical chemotherapy drug used primarily to treat pre-cancerous sun spots called actinic keratoses or AKs,” says Dr. Young.  “The one I use most often is 5-fluorouracil which works by killing fast-growing cells such as the abnormal cells in squamous cell carcinoma, for example.”

With the incidence of skin cancers on the rise -  it is estimated that one in five Americans will develop skin cancer in their lifetime - Dr. Young says early detection is key. The five-year survival rate for patients whose melanoma is detected early is approximately 98%, according to the Skin Cancer Foundation. For patients whose melanoma has metastasized to distant organs, the survival rate is only 23%. “Routine skin cancer screenings are crucial but not everyone is as diligent as they should be about scheduling that yearly total body skin examination,” says Dr. Young.

Which is why many studies show cosmetologists, like Barbara, can potentially play a key role in the detection of early melanoma if they are trained on how to look at the skin for atypical moles and lesions while they are taking care of their customer’s hair or nails.

“If I see something while working on a client’s hair, I am sure to say something,” says Barbara who has recommended several people go see a dermatologist after seeing a suspicious looking spot.

“After all that I have been through battling skin cancer, my goal in life is not only to help others look good but feel good and most importantly, be healthy,” says Barbara.

Dermatologist, like Dr. Young, say they are grateful to patients like Barbara for helping to spread the word about the signs and symptoms of potential skin cancers that may include a mole that changes color, size, feel or bleed or a lesion with an irregular border and portions that appear red, pink, white, blue or blue-black.

“It's important to protect your skin from the sun all year, but your risk of skin cancer exposure goes up significantly during these summer months,” says Dr. Young. “The sun's UV rays are much stronger during the summertime than the rest of the year so I highly recommend wearing sunscreen daily with an SPF of 30 or higher.”