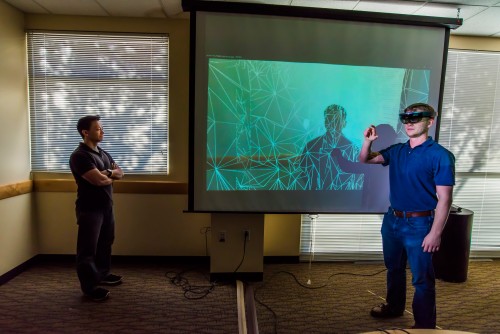 More than a pretty picture, Tam Le, left, and Todd Noel use augmented reality headsets to help train physical security personnel from around the world.

Newswise — When you hear the term “serious gaming” you might envision professional eSports competitors gearing up for a League of Legends World Championship in front of tens of thousands of live fans and tens of millions of streaming fans.

“Physical security goes beyond guards, gates and guns to include engineered solutions and complex systems that are designed to protect against the theft of nuclear materials and sabotage,” said Dominic Martinez, manager of the International Nuclear Security Engineering (INSE) department.

As part of Sandia’s center for Global Security and Cooperation, the goal of this department is to improve the security of vulnerable stockpiles of nuclear weapons and nuclear material worldwide. They are experts in physical security system design, installation and analysis and they assist with technical exchanges and applying nuclear security best practices. They provide their expertise to the International Atomic Energy Agency (IAEA) and National Nuclear Security Administration (NNSA)’s International Nuclear Security programs.

Educating others to secure nuclear materials

“It is important to educate others on how to properly secure nuclear materials around the world,” said Martinez. “These professional development courses help minimize the learning curve and bring everyone up to international standards and best practices as fast as possible.”

One of the workshops Sandia teaches in collaboration with NNSA and IAEA is straightforwardly called the International Training Course (ITC). This three-week course has been conducted every year and a half for more than 35 years, with frequent revisions to reflect improving technologies and international best practices.

ITC is an exercise-intensive course built around designing a physical protection system for a hypothetical nuclear power reactor or nuclear storage facility. Originally, the facility was presented as a floor plan on paper, but several years ago Le created 3-D models of the hypothetical nuclear facilities to enhance the students’ understanding of the layout.

“We model the mock facilities so the students can see the spatial relationships, see where things are in relation to each other. This helps them to understand a facility’s vulnerabilities, which can be difficult to see on paper or in writing,” Le said.

In addition to Le’s more classical simulations and visualizations for the ITC and other training courses, his recent work with augmented reality has the potential to revolutionize how the nuclear security engineering training team conducts workshops.

By combining augmented reality technology with Sandia’s Integrated Security Facility, Le said students can peer through walls to show all the processes needed to handle and protect nuclear material without using hazardous material. The facility uses the security systems originally designed to protect Category I nuclear material and now serves as a venue for hands-on physical security training. With its fully functional physical security and material accounting systems, the facility is invaluable for demonstrating physical security, material control as well as safety concepts and principles.

The same day the team received the augmented reality hardware, Noel created a camera placement tool that lets users add virtual sensors and cameras and then see what their fields of view would be in real time in the actual space.

The team uses the same software as small game-development companies to develop many of their training and analysis tools without having to create everything from scratch. “We simply took the industry standard tools used for game development and applied them to our national security challenges,” said Le.

“With augmented reality we’re able to do things that we wouldn’t normally be able to do. We can show virtual characters handling material, putting it into the system, show how the material is taken out, the material flow, understand the vulnerabilities and where materials can be lost. With this technology, we can actually show what is going on behind the walls,” said Le. “The application of these new holographic technologies will shape the future of our visualization, training and analysis capabilities and is only limited by our creativity.”