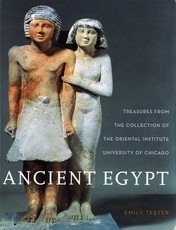 Books and other publications produced on the ancient Middle East by the University of Chicago are now available free on-line.

Newswise — A wealth of material that documents the ancient Middle East has become available through a new, free online service at the Oriental Institute."¨

The material comes from the extensive collection at the institute, which is a major publisher of important academic books on the languages, history and cultures of the ancient Middle East. The effort began in 1906, when the University started issuing publications that have been essential for studying the past."¨

Since that time, more than 272 books have been published, ranging from dictionaries of the Assyrian and Hittite languages, to historical and archaeological studies and oversized folio volumes that document Egyptian temples and tombs."¨

Gil Stein, Director of the Oriental Institute, said, "Our publications are the lasting record of our excavations and research. They are fundamental tools for scholars of the ancient Middle East throughout the world. Making these books available to our colleagues, to educators and the public reflects our mission to share knowledge." "¨

Publication of its research is a central tenet of the mission of the Oriental Institute. Equally important is making that research accessible to scholars and individuals throughout the world."¨

"¨New titles are made available for free download at the same time they are issued in print. Individuals, libraries and institutions may download one complimentary copy for personal use from the Oriental Institute's Web site: https://oi.uchicago.edu/research/pubs/catalog/.

More than a thousand copies of the Chicago Assyrian Dictionary have been downloaded since May 2008."¨To date, 147 Adobe PDFs (portable document files), each containing an entire book, can be accessed at the site. Many of those titles are older publications that have long been out of print. An additional 125 older titles, which comprise the institute's Egyptological collection published since the 1920s, such as the Epigraphic Survey, are being scanned in preparation for free Internet distribution."¨

Another 138 older titles, which document the institute's research on Anatolian, Arabic, Iranian, Mesopotamian, Syro/Palestinian cultures, among others, will continue to be scanned and distributed as time and funds permit."¨

Response to the EPI has been overwhelming, with positive comments received from all over the world. Complimentary Web distribution ensures that publications of the Oriental Institute, whether new or old, are made available to everyone with access to the Internet, especially in countries where the institute conducts research."¨

Thomas Urban, manager of the Publications Department at the Oriental Institute, said, "Technology now makes it possible for us to make these works widely available. So much effort goes into each volume—the author's original research, editorial work, artwork and photography. It is rewarding that these books, many of which are long out of print, can be consulted."

"¨Statistics on downloads of electronic files and sales of printed books have been carefully tracked, and the Publication Sales office has noted that the availability of free downloads has not adversely impacted the sale of the printed volumes. In fact, the availability of free PDFs of titles has increased print sales. After the complimentary distribution of 21 titles—books that had not been accessible via the Internet before 2008—print sales of those same titles increased by 7 percent compared to the previous two years.

"¨"It seemed counterintuitive that making the electronic files available without charge would actually stimulate the sale of hard copies, but that is what we are seeing," Urban said. "We suspect that people are sampling the book through the download, then they decide they want a hard copy. This is an important message to others who are contemplating making their books available on the Internet," he added."¨

Print copies of the publications are available through the Oriental Institute's distributor, David Brown Books: http://www.oxbowbooks.com/.