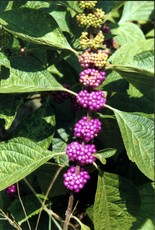 Newswise — Swatting mosquitoes and dodging other biting bugs is nearly a year-round chore in the Southeast, but such pests are swarming across the country with the advent of summer weather. And with warnings about West Nile virus and other insect-borne diseases out, keeping the pests away has taken on new urgency.

A traditional folk remedy, known among people in Mississippi's hill country for at least a century, may provide some relief without all the worries of DEET and other harsh chemicals. Scientists at the United States Department of Agriculture-Agriculture Research Service housed at the National Center for Natural Products Research at the University of Mississippi have isolated compounds in the American beautyberry plant, Callicarpa americana, that may keep chomping insects away.

"My grandfather would cut branches with the leaves still on them and crush the leaves, then he and his brothers would stick the branches between the harness and the horse to keep deerflies, horseflies and mosquitoes away," said Charles T. Bryson, an ARS botanist in Stoneville, Miss. "I was a small child, maybe 7 or 8 years old, when he told me about the plant the first time. For almost 40 years, I've grabbed a handful of leaves, crushed them and rubbed them on my skin with the same results."

Bryson told his supervisor about the folklore repellent, and in 2004 the USDA-ARS at the UM natural products research center began investigating the beautyberry plant as a potential natural insect repellent.

Charles Cantrell, an ARS chemist in Oxford, and Jerry Klun, an ARS entomologist in Beltsville, Md., confirmed that the natural remedy wards off biting insects, such as ticks, ants and mosquitoes: "I've rubbed the leaves on my arms, and it works," Cantrell said.

"Traditional folklore remedies many times are found to lead nowhere following scientific research," he continued. "The beautyberry plant and its ability to repel mosquitoes is an exception. We actually identified naturally occurring chemicals in the plant responsible for this activity."

Three repellent chemicals were extracted during the 12-month study: callicarpenal, intermedeol and spathulenol. The research concluded that all three chemicals repulse mosquitoes known to transmit yellow fever and malaria. Mosquitoes carrying the West Nile virus were not tested as part of the study, but the USDA-ARS has since filed a patent application to use callicarpenal as an anthropod repellent.

There are barriers, however, to producing the repellent for mass consumption. The product must be registered with the Environmental Protection Agency, which may cost millions of dollars, and a cost-effective manufacturing procedure must be determined.

"It's difficult to bring a repellent onto the market," Cantrell said. "We still have many unanswered questions: both the toxicity levels and evaporation rates are unknown. We're still in the early stages.

Cantrell also said, "It's quite unusual to find a plant producing this type of compound, but it's synthesizing it for some reason. Perhaps, it's naturally defending itself against insect attack."

The National Center for Natural Products Research is the nation's only university research center devoted to improving human health and agricultural productivity through the discovery, development and commercialization of pharmaceuticals and agrochemicals derived from plants, marine organisms and other natural products. University of Mississippi researchers at the center are studying hundreds of natural products that show promise to help treat a broad range of human illnesses, including cancer, AIDS, malaria, fungal infections, tuberculosis and emerging tropical diseases.

Other studies by both university and USDA scientists at the center may yield better products to control weeds, insects, fungal diseases in food crops and algae growth in commercial catfish ponds.

For more information about research at NCNPR, go to http://www.olemiss.edu/depts/pharmacy/ncnpr/