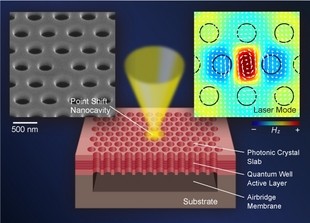 A new nanolaser produces stable, continuous near-infrared light at room temperature with great efficiency with the help of a honeycomb-like pattern known as a photonic crystal. (A print-quality version of this image is available.)

Newswise — Scientists at Yokohama National University in Japan have built a highly efficient room-temperature nanometer-scale laser that produces stable, continuous streams of near-infrared laser light. The overall device has a width of several microns (millionths of a meter), while the part of the device that actually produces laser light has dimensions at the nanometer scale in all directions. The laser uses only a microwatt of power, one of the smallest operating powers ever achieved. This nanolaser design should be useful in future miniaturized circuits containing optical devices. The researchers present their nanolaser in the latest issue of Optics Express, an open-access journal published by the Optical Society of America, one of the ten Member Societies of the American Institute of Physics.

The laser is made of a semiconductor material known as gallium indium arsenide phosphate (GaInAsP). The laser's small size and efficiency were made possible by employing a design, first demonstrated at the California Institute of Technology in 1999, known as a photonic-crystal laser. In this design, researchers drill a repeating pattern of holes through the laser material. This pattern is called a photonic crystal. The researchers deliberately introduced an irregularity, or defect, into the crystal pattern, for example by slightly shifting the positions of two holes. Together, the photonic crystal pattern and the defect prevent light waves of most colors (frequencies) from existing in the structure, with the exception of a small band of frequencies that can exist in the region near the defect.

By operating at room temperature and in a mode where laser light is emitted continuously, the new nanolaser from Yokohama National University distinguishes itself from previous designs. For a laser device that depends on the delicate effects of quantum mechanics, the random noise associated with even a moderately warm environment usually overwhelms the process of producing laser light. Yet this laser operates at room temperature. It also produces a continuous output of light, rather than a series of pulses. This desirable continuous operation is more difficult to achieve because it requires careful management of the device's power consumption and heat dissipation.

According to Yokohama researcher Toshihiko Baba, the new nanolaser can be operated in two modes depending what kind of "Q" value is chosen. Q refers to quality factor, the ability for an oscillating system to continue before running out of energy. A common example of an oscillating system would be a tuning fork. The higher its Q value, the longer it will ring after being struck. Lasers are oscillating systems because they produce light waves that repeatedly bounce back and forth inside the device to build up a beam. Nanolasers operated in a high-Q mode (20,000) will be useful for optical devices in tiny chips (optical integrated circuits). In a moderate-Q (1500) configuration the nanolaser needs only an extremely small amount of external power to bring the device to the threshold of producing laser light. In this near-thresholdless operation, the same technology will permit the emission of very low light levels, even single photons. Article: Kengo Nozaki, Shota Kita, and Toshihiko Baba, "Room temperature continuous wave operation and controlled spontaneous emission in ultrasmall photonic crystal nanolaser," Optics Express, Vol. 15, Issue 12, pp. 7506-7514, full text available at http://www.opticsexpress.org/abstract.cfm?id=138211.

About Optics ExpressOptics Express, the leading optics journal, reports on new developments in all fields of optical science and technology every two weeks. The journal provides rapid publication of original, peer-reviewed papers. It is published by the Optical Society of America and edited by Martijn de Sterke of the University of Sydney. Optics Express is an open-access journal and is available at no cost to readers online at http://www.OpticsExpress.org.