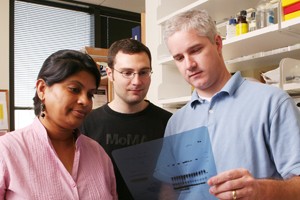 Dr. Christopher Cowan (right), assistant professor of psychiatry, found that increased brain connections during chronic drug use may actually limit behavioral changes associated with addiction, rather than support them. The team, including lead authors Dr. Suprabha Pulipparacharuvil and William Renthal, hopes this finding could lead to a pathway for pharmaceutical treatment of addiction.

Previous studies have shown that repeated use of drugs such as cocaine, amphetamines and nicotine increase the number of anatomical structures called dendritic spines in brain regions associated with pleasure and reward. These dendritic spines represent sites where brain cells communicate with one another. Many scientists believe that this long-lasting brain rewiring underlies the similarly persistent behaviors of drug-taking and drug-seeking associated with addiction and relapse. The mechanism that controls this brain rewiring, however, and its relationship to addiction-related behaviors were previously unknown.

In a study appearing in the Aug. 28 issue of Neuron, researchers found that cocaine suppresses the activity of the protein MEF2 in mice. Because MEF2 normally reduces the number of brain connections, suppressing MEF2 leads to an increase in dendritic spine density. The researchers also found that when they enhanced MEF2 activity in the brain this blocked the drug-induced increase in dendritic spine density and increased addiction-related behavioral responses to cocaine.

"Our findings suggest that increased brain connections during chronic drug use may actually limit behavioral changes associated with drug addiction, rather than support them," said Dr. Christopher Cowan, assistant professor of psychiatry at UT Southwestern and senior author of the study.

Researchers said they hope this finding could lead to a pharmaceutical treatment for addiction.

"Relapse, or the resumption of active drug-taking and drug-seeking, is very common in drug addicts," Dr. Cowan said. "Addiction-related brain changes and behaviors seem to be hardwired and semipermanent, and there are limited treatment options. Our data suggest that rather than trying to block the process of increasing dendritic spine density, we may actually want to look at treatments that try to enhance this process."

MEF2 is activated in response to brain activity. It provides negative feedback to eliminate the potential growth of too many communication sites between nerve cells. Repeated exposure to cocaine disrupts this function of MEF2, resulting in new brain connections.

To investigate the relationship between MEF2 and spine-density changes, the researchers varied the level of the protein in an area of the brain called the nucleus accumbens. This region is associated with the feelings of reward that drug addicts seek. Brain imaging done after mice were given cocaine showed that cocaine stopped MEF2 from limiting dendritic spine increases.

To test MEF2's relationship to behavior, researchers monitored the movement of mice after repeated daily exposure to the same amount of cocaine. This same dose of cocaine produced a larger behavioral response after repeated days of drug injections, resulting in a "sensitized" response. This sensitized behavioral response to the drug is very stable, lasting for many months after the drug is discontinued.

When the researchers manipulated animals so that their MEF2 levels remained high in the presence of cocaine, the animals were more sensitive to the drug. This suggested that increased communication sites might help combat the addiction process.

"This suggests the exciting possibility that MEF2 proteins may control expression of key genes that modulate drug-related brain changes and behavior," Dr. Cowan said. "If we understand which genes are influenced by MEF2, we can intervene and try to help the system resist or reverse these sensitization processes."

In 2006, 23.6 million people ages 12 and older needed treatment for drug or alcohol abuse, according to a Substance Abuse and Mental Health Services Administration survey. Substance abuse costs the U.S. more than half a trillion dollars annually, according to the National Institute on Drug Abuse.

Future research will focus on determining MEF2 target genes and exploring drug-related density changes in other regions of the brain associated with addiction, Dr. Cowan said.