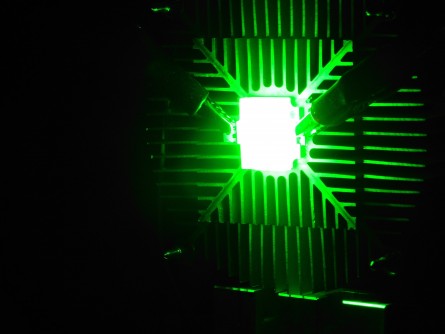 Bright and efficient emission due to the AIE mechanism

Newswise — Scientists at Queen’s University Belfast have been working as part of an international team to develop a new process, which could lead to a new generation of high-definition (HD), paving the way for brighter, lighter and more energy efficient TVs and smart devices.

The team’s findings, which have been reported in Science Advances, reveal that when quantum dots - tiny flecks of semiconductor that are prized for their crisp colours – are clustered together they are more fluorescent, providing a wide variety of colours.

Through the project, quantum dots containing methylammonium lead bromine (MAPbBr3) were created. The experts found that by creating lamellar structures – fine layers, alternating between different materials - the human eye's response to the visible light was very high. This means that the material re-emitted a lot of the light that it absorbed and very bright colours were created. The team have named this process aggregation-induced emission (AIE).

The Queen’s University team is led by Dr Elton Santos from the School of Mathematics and Physics.

Dr Santos said: “Through this research discovery, we anticipate that the number of colours a display can present can be increased more than 50 per cent. In practice, this means that we may have a new type of “high-definition” because of the number of colour combinations that the material can display. Therefore, the next HD generation is just as close as three to four years away.”

Professor Chih-Jen Shih who created the quantum dots and led the investigation at ETH Zurich, commented: “Normally the quantum yield, which determines the brightness, degrades significantly as quantum dots aggregate, forming crystalline solids. However, our investigations show that brighter levels are achievable because of the new photonic process that we have discovered and have named aggregation-induced emission (AIE).”

Dr Santos said: “This AIE process can revolutionise the quality of the colours in TVs because the base colours are red, blue and green. Using AIE we can create the brightest green colour ever achieved by any nanomaterial. Once this bright green is integrated with the other two colours, the number of new colour combinations could exceed what is currently possible. The latest QD technology, which is just about to be released to market, allows for one billion colours, which is 64 times more than the average TV. However, what using the process we have discovered, we can actually make this even better.”

Professor Shangchao Lin, who led the research at Florida State University, said: “Our findings also show that the perovskite nanocrystals emit light extremely quickly and are very energy efficient. This means reduction of electricity consumption, and consistent colour expression throughout a long lifespan.”

The researchers are currently looking for similar processes for blue and red colours so that they can create the “holy-grail” of screen displays, which would replicate all of the colours that can be captured by the human eye.

In terms of timescales, Professor Shih says the research is almost ready for commercialisation: “The remaining tasks will be to enhance the stability of these compounds and to ensure that they can endure high temperatures, humidity and electrical energy being applied.”