19-Oct-2017 1:05 PM EDT, by University of Minnesota College of Science and Engineering 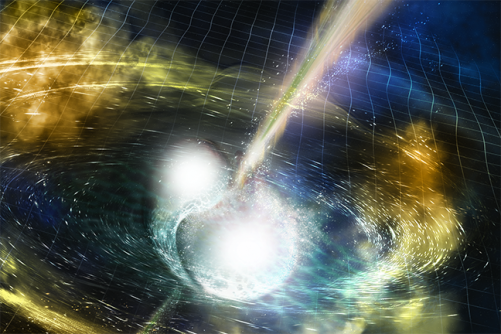 This illustration shows a neutron star merger with gravitational waves traveling away from the merger (shown as waves on a grid in space), along with the electromagnetic burst emitted in the process.

Newswise — MINNEAPOLIS / ST. PAUL (10/16/2017) — For the first time, scientists have directly detected gravitational waves—ripples in space and time—in addition to light from the spectacular collision of two neutron stars. This marks the first time that a cosmic event has been viewed in both gravitational waves and light. University of Minnesota astrophysicists were involved in the discovery.

The discovery was made using the U.S.-based Laser Interferometer Gravitational-Wave Observatory (LIGO), the Europe-based Virgo detector, and about 70 ground- and space-based observatories.

The LIGO-Virgo results are published today in the journal Physical Review Letters. Additional papers from the LIGO and Virgo collaborations and the astronomical community have been either submitted or accepted for publication in various journals.

“This is a really big deal and will open up a whole new area of astrophysics research to help us better understand our Universe,” said Vuk Mandic, a University of Minnesota professor of physics and astronomy whose research group has been a member of the LIGO Scientific Collaboration since 2007.

Neutron stars are the smallest, most dense stars known to exist and are formed when massive stars explode in supernovas. With about 20 kilometers, or 12 miles, in diameter a neutron star is so dense that a teaspoon of its material has a mass of about a billion tons.

As the two neutron stars spiraled together, about 130 million light years away, they emitted gravitational waves. On Aug. 17, 2017, at 8:41 a.m. Eastern Daylight Time, the two identical LIGO detectors located in Hanford, Wash., and Livingston, La., detected about 100 final seconds of this in-spiral gravitational wave signal.

The signal, named GW170817, was also observed by a third detector, Virgo, near Pisa, Italy. Due to its orientation with respect to the source at the time of detection, Virgo recovered a small signal. Combined with the signal sizes and timing in the LIGO detectors, this allowed scientists to precisely triangulate the position of the source in the sky.

About two seconds after the merger of the two neutron stars, the Gamma-ray Burst Monitor on NASA’s Fermi space telescope detected a short burst of gamma rays. Rapid gravitational-wave detection by the LIGO-Virgo team, coupled with Fermi’s gamma-ray detection, enabled the launch of follow-up by telescopes around the world. In the days and weeks following the merger, other forms of light, or electromagnetic radiation—including X-ray, ultraviolet, optical, infrared, and radio waves—were detected.

Fermi was able to provide a localization that was later confirmed and greatly refined with the coordinates provided by the combined LIGO-Virgo detection. With these coordinates, a handful of observatories around the world were able, hours later, to start searching the region of the sky where the signal was thought to originate. A new point of light, resembling a new star, was first found by optical telescopes. Ultimately, about 70 observatories on the ground and in space observed the event at their representative wavelengths.

Transforming our understanding of the Universe

“It is tremendously exciting to experience a rare event that transforms our understanding of the workings of the Universe,” said France A. Córdova, director of the National Science Foundation (NSF), which funds LIGO. “This discovery realizes a long-standing goal many of us have had, that is, to simultaneously observe rare cosmic events using both traditional as well as gravitational-wave observatories.”

The LIGO data indicated that two astrophysical objects involved in the merger were much lighter than the binary black holes observed by LIGO and Virgo in the past. They were estimated to be in a range from around 1.1 to 1.6 times the mass of the sun, in the mass range of neutron stars.  And while binary black holes produce “chirps” lasting a fraction of a second in the LIGO detectors’ sensitive band, the Aug. 17 chirp lasted approximately 100 seconds and was seen through the entire frequency range of LIGO.

“It immediately appeared to us the source was likely to be neutron stars, the other coveted source we were hoping to see—and promising the world we would see,” said David Shoemaker, spokesperson for the LIGO Scientific Collaboration and senior research scientist in MIT’s Kavli Institute for Astrophysics and Space Research.

“This event makes the first connection between short gamma ray bursts and mergers of binary neutron stars,” said Andrew Matas, a postdoctoral researcher at the University of Minnesota. “We now know that at least some gamma ray bursts are generated in neutron star mergers, which has been suspected for a long time. Moreover, the gamma ray and gravitational wave signals together provide a test of Einstein’s general theory of relativity, confirming that gravitational waves travel at the speed of light.”

At the moment of collision, the bulk of the two neutron stars merged into one ultradense object, emitting a “fireball” of gamma rays. Following this initial fireball is a “kilonova”—a phenomenon by which the material that is left over from the neutron star collision, which glows with light, is blown out of the immediate region and far out into space. The new light-based observations show that heavy elements, such as lead and gold, are created in these collisions and subsequently distributed throughout the Universe.

In the weeks and months ahead, telescopes around the world will continue to observe the afterglow of the neutron star merger and gather further evidence about various stages of the merger, its interaction with its surroundings, and the processes that produce the heaviest elements in the universe.

LIGO at the University of Minnesota

“Our group at the University of Minnesota has made numerous critical contributions to LIGO, ranging from data analysis to LIGO detector characterization and data quality studies,” said Mandic.

“Our focus in the coming years will be on detecting the stochastic background in gravitational waves, the background noise produced by many binary neutron stars and black holes that are too far and too faint to be detected individually. Such a detection will provide unique information about the formation and evolution of these objects, and of the structure we observe in the Universe,” Mandic added.

LIGO is funded by the NSF, and operated by Caltech and MIT, which conceived of LIGO and led the Initial and Advanced LIGO projects. Financial support for the Advanced LIGO project was led by the NSF with Germany (Max Planck Society), the U.K. (Science and Technology Facilities Council) and Australia (Australian Research Council) making significant commitments and contributions to the project.

More than 1,200 scientists and some 100 institutions from around the world participate in the effort through the LIGO Scientific Collaboration, which includes the GEO Collaboration and the Australian collaboration OzGrav. Additional partners are listed at http://ligo.org/partners.php

The Virgo collaboration consists of more than 280 physicists and engineers belonging to 20 different European research groups: six from Centre National de la Recherche Scientifique (CNRS) in France; eight from the Istituto Nazionale di Fisica Nucleare (INFN) in Italy; two in the Netherlands with Nikhef; the MTA Wigner RCP in Hungary; the POLGRAW group in Poland; Spain with the University of Valencia; and the European Gravitational Observatory, EGO, the laboratory hosting the Virgo detector near Pisa in Italy, funded by CNRS, INFN, and Nikhef.