Scientists Use Tiny Diamond Anvils to Put Squeeze on Materials 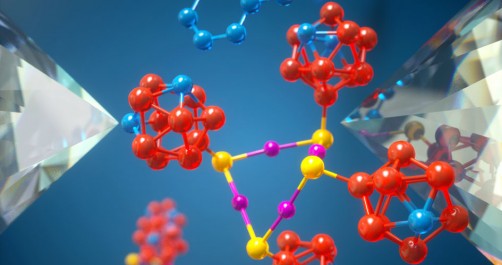 Specks of diamond act as tiny anvils that compress molecules, changing their bonds in a new way to do chemistry.

Newswise — Scientists have turned tiny bits of diamond and super-hard specks into “molecular anvils” that squeeze and twist molecules until chemical bonds break and atoms exchange electrons. They believe the method­ offers a new way to perform chemistry research at the molecular level that is greener, more efficient and much more precise.

“Unlike other mechanical techniques, which basically pull molecules until they break apart, we show that pressure from molecular anvils can both break chemical bonds and trigger another type of reaction where electrons move from one atom to another,” said Stanford’s Hao Yan, one of the lead authors of the study, published Feb. 21 in Nature, which also included researchers from the University of Chicago, among others.

A reaction that’s mechanically driven has the potential to produce entirely different products from the same starting ingredients than one driven the conventional way by heat, light or electrical current, said study co-author Nicholas Melosh, an associate professor at Stanford and the SLAC National Accelerator Laboratory.

It’s also much more energy efficient, and because it doesn’t need heat or solvents, it should be environmentally friendly.

Diamond anvil cells squeeze materials between the flattened tips of two diamonds and can reach tremendous pressures—more than 500 gigapascals, or about 1.5 times the pressure at the center of the Earth. They’re used to explore the minerals deep inside the Earth and how materials under pressure develop unusual properties, among other things.

When a sample is squeezed it usually deforms uniformly, with all the bonds between atoms shrinking by the same amount, Melosh said. Yet this is not always the case: “If you compress a material that has both hard and soft components, such as carbon fibers embedded in epoxy, the bonds in the soft epoxy will deform a whole lot more than the ones in the carbon fiber,” he said.

Researchers wondered whether they could harness that same principle to bend or break specific bonds in an individual molecule. Melosh’s team had done a series of experiments with diamondoids, the smallest possible bits of diamond, which are invisible to the naked eye and weigh less than a billionth of a billionth of a carat. Like carbon fibers in epoxy, these building blocks contained hard and soft parts.

The scientists wondered: If put into a diamond anvil, would the hard parts act as mini-anvils that squeeze and deform the soft parts in a non-uniform way? They soon discovered they would.

For their first experiments, they used copper sulfur clusters—tiny particles consisting of eight atoms—attached to molecular anvils made of another rigid molecule called carborane. They put this combination into the diamond anvil cell and cranked up the pressure.

When the pressure got high enough, atomic bonds in the nanowire broke. But electrons also moved from its sulfur atoms to its copper atoms and pure crystals of copper formed, which would not have occurred in conventional reactions driven by heat, the researchers said.

Computational studies, led by Giulia Galli, the Liew Family Professor of Molecular Engineering at the University of Chicago’s Institute for Molecular Engineering, revealed what had happened: Pressure from the diamond anvil cell moved the molecular anvils, and they in turn squeezed chemical bonds in the cluster, compressing them at least 10 times more than their own bonds had been compressed.

Understanding the scientific processes at work computationally is important because it expands the reach of the knowledge from the experiment. “All together, these methods reveal a comprehensive picture of what happens to this molecule, which will allow you to understand and apply principles you’ve learned to other systems,” Galli said.

“This is exciting, and it opens up a whole new field,” Mao said. “From our side, we’re interested in looking at how pressure can affect a wide range of technologically interesting materials, which have a lot of potential for next-generation solar cells. Once we understand what’s possible from a very basic science point of view, we can think about the more practical side.”

The researchers hope to use this technique to look at reactions that are hard to do in conventional ways and see if compression makes them easier, Yan said.

“If we want to dream big, could compression help us turn carbon dioxide from the air into fuel, or nitrogen from the air into fertilizer?” he said. “These are some of the questions that molecular anvils will allow people to explore.”

In addition to Argonne, UChicago, SLAC, Stanford, Berkeley Lab scientists, researchers who contributed to this study came from the National Autonomous University of Mexico, Justus-Liebig University in Germany and the Hong Kong University of Science and Technology.