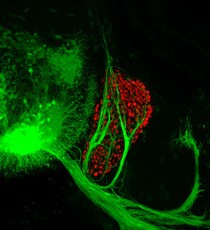 Without communication between motor and sensory axons, the sorting between the fascicles breaks down and instead of reaching for muscles, some motor neurons leave their lane, make a U-turn and head back toward the spinal cord. 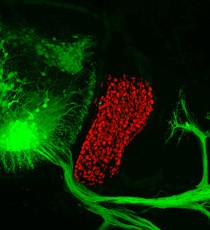 Constant crosstalk between motor (shown in green) and sensory (shown in red) nerves ensures that the two different types of neurons join up after they emerge from the spinal cord but sort into separate fascicles containing either sensory or motor axons, but never both.

Newswise — Come summer, we will once again marvel at the amazing athletic skills of Olympic athletes while in fact, the simple act of walking is no less remarkable. Just to prevent us from toppling over, the neuromuscular circuitry that controls all bodily movements relies on constant sensory feedback from the periphery to fine-tune its commands to hundreds of muscles.

But it still remains unclear, how during embryonic development, sensory and motor neurons become incorporated into tightly coordinated pathways without getting mixed up. In a study, published in the current issue of Science, scientists at the Salk Institute for Biological Studies report that constant crosstalk between growing sensory and motor neurons keeps them on track.

Skeletal muscle consists of thousands of muscle fibers, each controlled by one motor neuron in the spinal cord that connects to individual muscle fibers and relays signals from the brain. Sensory stretch receptors, which are located in most muscles, as well as temperature, pressure and pain receptors, all send information back to the central nervous system.

"If you look at a cross section of a nerve bundle it really is a mix of wires. Some wires are sending signals out from the spinal cord and others are sending signals to the spinal cord," explains Samuel Pfaff, Ph.D, a professor in the Gene Expression Laboratory, who together with former post doctoral fellow Till Marquardt, Ph.D., now a group leader at the European Neuroscience Institute in GÃ¶ttingen, directed the study. "The motor and sensory nerves are not unlike a roadway with orderly traffic moving in both directions by staying in its proper lanes," he adds.

During embryonic development, nerve cells hesitantly extend tentacle-like protrusions called axons. Growth cones, small enlargements at the axons tip actively search their local environment for chemical cues that guide them to their target. One such cue comes from a class of molecules called ephrins, which repel cells carrying Eph proteins, gently nudging them in the right direction.

"The fact that neurons can express receptors and ligands and that everything can be a receptor or ligand, raised the question what happens when you have two neurons that grow beside each other and occasionally bump into one another," says Pfaff. To answer the question, the Salk researchers settled on sensory and motor neurons, which extend their axons along the same pathway to the periphery.

First, co-first authors Benjamin W. Gallarda, and Dario Bonanomi, Ph.D., generated mice that allowed them to genetically distinguish between sensory and motor neurons with different "labels" . With ephrin/Eph signaling intact, their axons joined up after they emerged from the spinal cord but sorted into separate fascicles containing either sensory or motor axons, but never both. When the researchers deleted EphA3 and EphA4 in motor neurons, interrupting the cross talk across the highway divide, things started to go severely wrong.

The sorting between the fascicles of the motor and sensory axons broke down and instead of reaching for muscles, some motor neurons left their lane, made a U-turn, joined the sensory lane and headed back toward the spinal cord. "It was a real wiring disaster," says Pfaff. "It appears that ephrin and Eph not only control the decision where these axons grow out in the periphery but also maintain the normal arrangement between the motor and sensory pathway."

The ephrin/Eph tag team not only helps the body's motor nerve cells grow along their proper paths during embryonic development, it also plays a major role in preventing spinal cord neurons from regenerating after injuries. Hoping to coax injured neurons into rewiring severed connections, researchers in the spinal cord field are hard at work trying to overcome the block that prevents axonal growth within the central nervous system.

"Our findings emphasize that this needs to be done cautiously. If you promote indiscriminate motor axon growth it could cause a lot of problems," cautions Pfaff. "There are many examples of extensive neuronal reorganization following spinal cord injuries and one often underappreciated byproduct is severe pain."

Researchers who also contributed to the study include Daniel MÃ¼ller, Ph.D., a post doctoral researcher in the Marquardt laboratory, Arthur Brown, Ph.D., associate professor at the University of Western Ontario, Canada, postdoctoral researchers William A. Alaynick, Ph.D., Shane E. Andrews, Ph.D., both in the Pfaff laboratory, and Greg Lemke, professor in the Molecular Neurobiology Laboratory at the Salk.