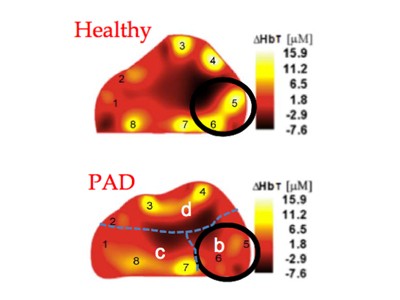 Newswise — Approximately 8 to 12 million people in the United States alone are suffering from peripheral arterial disease (PAD), a common vascular problem that is caused by narrowing of the arteries as a result of plaque buildup. The plaque accumulation leads to an insufficient blood flow to the body’s extremities and increases a person’s risk for heart attack and stroke by up to six times. PAD is also one of the most serious complications of diabetes.

Andreas Hielscher, professor of biomedical engineering, electrical engineering, and of radiology (physics)at Columbia Engineering, is developing a novel technology that could improve diagnosis of this crippling disease and make it easier to monitor patients. To build and test a so-called dynamic optical tomographic imaging system, his team has won a $2.5 million five-year grant from the National Heart, Lung, and Blood Institute (NHLBI). This system uses near-infrared light to map the concentration of hemoglobin in the body’s tissue and reveal how well blood is perfusing patients’ hands and feet.

“We believe our new vascular optical tomographic imaging (VOTI) system will revolutionize the way we diagnose and monitor peripheral artery disease,” says Hielscher, who leads an interdisciplinary team of Columbia engineers, radiologists, and vascular surgeons. He and his colleagues have been working on this research for the last three years, testing a prototype system in clinical pilot studies.

Because most patients are asymptomatic and there is no single reliable screening method, PAD is considerably under-diagnosed. Most of the undiagnosed and untreated patients are diabetics who commonly suffer from peripheral neuropathy and therefore do not sense and report symptoms, such as pain while walking, that are early signs of the disease. In fact, more than 60% (~75,000 per year) of all lower extremity amputations in the United States are performed in diabetic patients with PAD. With the number of diabetic patients expected to triple and reach almost 100 million by 2050, the problems related to undiagnosed PAD will only rise in the years to come.

Hielscher hopes to remedy that with his VOTI system, which relies on near-infrared light that is shone onto different locations on a patient’s foot. Transmitted light intensities are then used to generate spatially resolved maps of oxy- and deoxy-hemoglobin, the two main components of blood.

“We’ve successfully used the VOTI to detect PAD in the lower extremities,” says Michael Khalil, a PhD student working in Hielscher’s Biophotonics & Optical Radiology Laboratory. “Unlike other methods, our VOTI technology can provide maps of oxy-, deoxy-, and total hemoglobin concentration throughout the patient’s foot and identify problematic regions that require intervention.”

The results of the team’s latest study, involving 20 patients and 20 healthy volunteers, were recently published in the European Journal of Vascular and Endovascular Surgery. “This is probably the most exciting new technology in the field,” notes Gautam Shrikhande, a vascular surgeon and former director of the Vascular Laboratory at Columbia University Medical Center, and co-author of the study.

Hielscher plans to use the NIH funding to build upon research previously funded by a Translational Research Grant from the Wallace H. Coulter Foundation and develop a new prototype and test the technology in a larger clinical study.

Hielscher also is working with the New York City Partnership (NYCP) fund to commercialize certain aspects of this technology. He has received funding through NYCP’s Bioaccelerate program to develop a commercially viable device that can be used intra-operatively and guide interventions by vascular surgeons. Monitoring wound healing is another promising applications of this technology. His team has already filed a broad patent application and believes that a commercial device could be available within two years.###