Singing in the Brain: Birdsongs Give Insights Into Learning New Behaviors 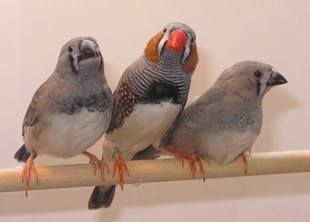 Photo and audio: The Fee Lab, McGovern Institute at MIT

Singing Zebra Finch Much like human babies, juvenile songbirds babble before they master complex vocalizations of their adult tutors. The Fee lab found that zebra finches use two distinct neural pathways for generating songs -- one for babbling early in life and one for singing in adulthood. This photo shows an adult zebra finch with two 4-week-old juveniles. To hear the babbling and the mature singing, go to this website and click on the buttons: http://web.mit.edu/~aronov/www/babbling/

Newswise — Young songbirds babble before they can mimic an adult's song, much like their human counterparts. Now, in work that offers insights into how birds—and perhaps people—learn new behaviors, MIT scientists have found that immature and adult birdsongs are driven by two separate brain pathways, rather than one pathway that slowly matures. The work is reported in the May 2, 2008 Science.

"The babbling during song learning exemplifies the ubiquitous exploratory behavior that we often call play but that is essential for trial-and-error learning," comments Michale Fee, the senior author of the study and a neuroscientist in the McGovern Institute for Brain Research at MIT and an associate professor in MIT's Department of Brain and Cognitive Sciences.

Early on, baby zebra finches produce a highly variable, babbling song. They practice incessantly until they can produce the stereotyped, never-changing song of adults. "This early variability is necessary for learning, so we wanted to determine whether it is produced by an immature adult motor pathway or by some other circuit," Fee explains.

Past research has shown that the zebra finch has two distinct brain circuits dedicated to song, one for learning and another " known as the motor circuit " for producing the learned song. Damage to the first circuit while the bird is still learning prevents further learning, so the song remains immature. Yet in an adult that has already learned its song, disabling the learning circuit has no effect on song production.

Scientists assumed that the motor circuit is equally important in producing baby birds' babbling, but surprisingly, no one had done the experiments to find out. First author Dmitriy Aronov and co-author Aaron Andalman, both graduate students in Fee's lab, adapted existing techniques previously developed in the Fee lab so that they could temporarily disable parts of the brain, and record from neurons in the singing bird. The results were surprising.

When they disabled a part of the motor circuit known as HVC in these very young birds, the babies continued to sing, implying that some other brain region produces the babbling. The authors suspected that a key component of the learning circuit, called LMAN, has a previously unknown motor function. They confirmed this by showing that when LMAN was disabled in very young birds, they ceased babbling.

"This tells us that singing is driven by two different motor circuits at different stages of development," explains Aronov. "We've long known that these two pathways develop physiologically at different times, so there's an elegant parallel between our functional findings and what is already known about anatomy."

But what happens to LMAN in adulthood, after birds have learned their song? Contrary to the "use it or lose it" assumption, the authors found that LMAN retains its ability to drive babbling even in adulthood. Disrupting HVC in adults caused the birds to revert immediately to babbling, suggesting that LMAN can take over again if the more powerful signals from HVC are blocked.

Fee speculates that these results may apply more broadly to other forms of immature or exploratory behavior, in humans as well as birds. "In birds, the exploratory phase ends when learning is complete," he says. "But we humans can always call upon our equivalent of LMAN, the prefrontal cortex, to be innovative and learn new things."

The NIH and graduate fellowships from the Hertz Foundation (D.A.) and the Friends of the McGovern Institute (A.A.) funded this study.

About the McGovern Institute at MITThe McGovern Institute for Brain Research at MIT is led by a team of world-renowned neuroscientists committed to meeting two great challenges of modern science: understanding how the brain works and discovering new ways to prevent or treat brain disorders. The McGovern Institute was established in 2000 by Patrick J. McGovern and Lore Harp McGovern, who are committed to improving human welfare, communication and understanding through their support for neuroscience research. The director is Robert Desimone, formerly the head of intramural research at the National Institute of Mental Health. Further information is available at: http://web.mit.edu/mcgovern/