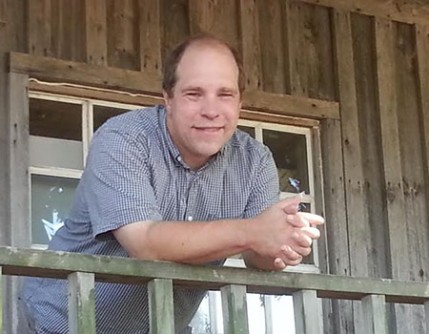 Tim Eichler, Ph.D., is assistant professor of earth and atmospheric sciences at SLU.

Newswise — A $20 million grant from the National Science Foundation will allow a consortium of Missouri universities and research institutions, including Saint Louis University, to study how climate change is likely to affect agriculture in the state.

The award, named "The Missouri Transect: Climate, Plants and Community," will fund scientists from a variety of fields as they examine the impact of climate change on aspects of farming, like plant stress and soil changes.

Tim Eichler, Ph.D., assistant professor of earth and atmospheric sciences, is the principal investigator at SLU and will study changes to regional weather patterns.

“My role is assessing regional climate,” Eichler said. “I’m looking at how global warming may impact the frequency, intensity, and tracks of storms that affect Missouri.”

Eichler notes that Missouri agriculture plays a major role in the national economy and may suffer serious consequences due to global warming.

“Climate models suggest that the main agricultural belts in the U.S. may shift northward in response to climate change,” Eichler said. “With the recent development of high-resolution climate models, the regional impacts of climate change due to drought and floods can now be examined.”

Eichler uses a software package to track storms in climate models and global data sets. Climate models have evolved, and where we once were only able to spot broad global patterns, we’re now able to see how climate change affects regions of the state. Thanks to high resolution data sets and observations that go back 40 to 50 years, researchers have better information about regional climate changes than ever before.

Eichler cautions, however, that the models offer assessments, not specific forecasts.

“Nothing is certain, but the physics do give us a certain set of possibilities,” Eichler said. “For example, a warmer climate results in an increase in precipitable water which may cause more extreme rainfall events. When we are uncomfortable on a hot, summer day, it’s due to the atmosphere containing more water which reduces evaporation from our skin.”

“At the same time, a warmer climate also may have more infrequent storms. We might have a period of drought, followed by a downpour. This is really hard on crops that are already stressed by drought."

Eichler believes that regional assessments will change the way that people think about climate change.

“People will begin to care more when we can tell them how climate change will affect them,” Eichler said. “Now, we’ll be able to tell farmers in Missouri if there is a higher probability of an increase in heat waves, floods and droughts -- things that will affect them directly.”

The department also is home to first geophysics program in the western hemisphere and the SLU Earthquake Center, which monitors the New Madrid Fault and other seismic hot spots in the central United States.

Saint Louis University is a Catholic, Jesuit institution that values academic excellence, life-changing research, compassionate health care, and a strong commitment to faith and service. Founded in 1818, the University fosters the intellectual and character development of more than 13,500 students on two campuses in St. Louis and Madrid, Spain. Building on a legacy of nearly 200 years, Saint Louis University continues to move forward with an unwavering commitment to a higher purpose, a greater good.

The National Science Foundation is an independent federal agency that supports fundamental research and education across all fields of science and engineering. In fiscal year (FY) 2012, its budget was $7.0 billion. NSF funds reach all 50 states through grants to nearly 2,000 colleges, universities and other institutions. Each year, NSF receives about 50,000 competitive requests for funding, and makes about 11,500 new funding awards. NSF also awards about $593 million in professional and service contracts yearly.