Solar Eclipse to Astonish New Jersey and the U.S. On August 21 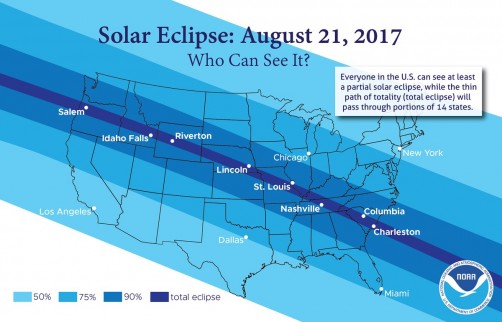 The total solar eclipse on Aug. 21 will pass through parts of 14 states, but everyone in America could see at least a partial eclipse, weather permitting.

Newswise — Americans will be treated to a spectacular total solar eclipse on Aug. 21 in an approximately 70-mile-wide zone stretching from the Northwest to the Southeast.

The moon will block about 70 percent of the sun at the state’s northern border to 80 percent in Cape May, according to Carlton “Tad” Pryor, a professor in the Department of Physics and Astronomy at Rutgers University-New Brunswick.

“A total solar eclipse is always very dramatic,” Pryor said. “The sky gets dark, animals and birds go quiet as if it’s nighttime and it’s a little bit cooler outside.  The partial solar eclipse that will be visible in New Jersey is much more subtle, but will be noticeable if you know what to look for.”

Because it is unsafe to look directly at the sun, Pryor said anyone wishing to see the phenomenon must protect their eyes with specially made and certified filters, or by observing the eclipse indirectly.

Direct viewing can be done safely with No. 14 arc welder glass or with eclipse viewing glasses that meet the following criteria outlined by NASA:

Homemade filters or sunglasses – even very dark ones – are NEVER safe for looking directly at the sun.  There are reports of potentially unsafe eclipse glasses appearing for sale, so be sure to buy eclipse viewers from reputable vendors.

If the sky is clear at around 2:45 p.m. on the day of the eclipse, stand in a leafy tree’s shadow and look at the ground.  The smallest spots of sunlight will make little crescent shapes, showing the sun’s apparent shape as the moon crosses in front.

Total eclipses in the Continental U.S. are unusual, with the last one unfolding in 1979, Pryor said. Hawaii experienced one in 1991, and New Jersey will have to wait until May 1, 2079, to get one. Even then, the total eclipse will be visible only in the northern two-thirds of the state and will occur only a few minutes after sunrise, so it won’t be easily visible.

“An eclipse is a remarkable phenomenon,” Pryor said. “It was always regarded as signifying something important. Some people thought something was eating the sun and tried to make noise to scare it away. But the ancient Greeks understood what was happening and could start to predict some of these phenomena.”