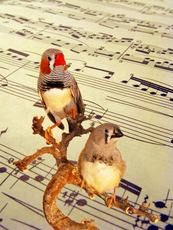 Zebra finches learn to sing by listening to their fathers. MIT researchers have gained new insights into the brain mechanisms that underlie this kind of trial-and-error learning.

Newswise — Learning complex skills like playing an instrument requires a sequence of movements that can take years to master. Last year, MIT neuroscientists reported that by studying the chirps of tiny songbirds, they were able to identify how two distinct brain circuits contribute to this type of trial-and-error learning in different stages of life.

Now, the researchers have gained new insights into a specific mechanism behind this learning. In a paper being published in the Proceedings of the National Academy of Sciences during the week of July 6, the scientists report that as zebra finches fine-tune their songs, the brain initially stores improvements in one brain pathway before transferring this learned information to the motor pathway for long-term storage.

The work could further our understanding of the complicated circuitry of the basal ganglia, brain structures that play a key role in learning and habit formation in humans. The basal ganglia are also linked to disorders like Parkinson's disease, obsessive-compulsive disorder and drug addiction.

"Birds provide a great system to study the fundamental mechanisms of how the basal ganglia contributes to learning," said senior author Michale Fee, an investigator in the McGovern Institute for Brain Research at MIT. "Our results support the idea that the basal ganglia are the gateway through which newly acquired information affects our actions."

Young zebra finches learn to sing by mimicking their fathers, whose song contains multiple syllables in a particular sequence. Like the babbling of human babies, young birds initially produce a disorganized stream of tones, but after practicing thousands of times they master the syllables and rhythms of their father's song. Previous studies with finches have identified two distinct brain circuits that contribute to this behavior. A motor pathway is responsible for producing the song, and a separate pathway is essential for learning to imitate the father. This learning pathway, called the anterior forebrain pathway (AFP), has similarities to basal ganglia circuits in humans.

"For this study, we wanted to know how these two pathways work together as the bird is learning," explained first author Aaron Andalman, a graduate student in Fee's lab. "So we trained the birds to learn a new variation in their song and then we inactivated the AFP circuit to see how it was contributing to the learning."

To train the birds, researchers monitored their singing and delivered white noise whenever a bird sang a particular syllable at a lower pitch than usual.

"The bird hears this unexpected noise, thinks it made a 'mistake', and on future attempts gradually adjusts the pitch of that syllable upward to avoid repeating that error," Fee said. "Over many days we can train the bird to move the pitch of the syllable up and down the musical scale."

On a particular day, after four hours of training in which the birds learned to raise the pitch, the researchers temporarily inactivated the AFP with a short-acting drug. The pitch immediately slipped back to where it had been at the start of that day's training session — suggesting that the recently learned changes were stored within the AFP.

[Listen to the birds adjust the pitch of their song: http://web.mit.edu/feelab/media/andalmanandfee.html ]

But the researchers found that over the course of 24 hours, the brain had transferred the newly learned information from the AFP to the motor pathway. The motor pathway was storing all of the accumulated pitch changes from previous training sessions.

Fee compares the effect to how recent edits to a document are temporarily stored in a computer's dynamic memory and then saved regularly to the hard drive. It is the accumulation of changes in the motor pathway "hard drive" that constitutes the development of a new skill.

The NIH and Friends of McGovern Institute supported this research.