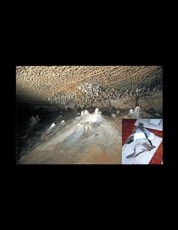 Small white stalagmites. Insert: one stalagmite cut vertically in half, showing generations of growth with the white one on top.

Newswise — Small white stalagmites lining caves in the Midwest may help scientists chronicle the history of the New Madrid Seismic Zone (NMSZ) " and even predict when the next big earthquake may strike, say researchers at the Illinois State Geological Survey and the University of Illinois at Urbana-Champaign.

While the 1811-12, magnitude 8 New Madrid earthquake altered the course of the Mississippi River and rung church bells in major cities along the East Coast, records of the seismic zone's previous movements are scarce. Thick layers of sediment have buried the trace of the NMSZ and scientists must search for rare sand blows and liquefaction features, small mounds of liquefied sand that squirt to the surface through fractures during earthquakes, to record past events. That's where the stalagmites come in.

The sand blows are few and far between, said Keith Hackley, an isotope geochemist with the Illinois State Geological Survey. In contrast, caves throughout the region are lined with abundant stalagmites, which could provide a better record of past quakes. "We're trying to see if the initiation of these stalagmites might be fault-induced, recording very large earthquakes that have occurred along the NMSZ," he said.

Hackley and co-workers used U-Th dating techniques to determine the age of stalagmites from Illinois Caverns and Fogelpole Cave in southwestern Illinois. They discovered that some of the young stalagmites began to form at the time of the 1811-12 earthquake.

Water slowly trickles through crevices in the ceiling of a cave and drips onto the floor. Each calcium carbonate-loaded drip falls on the last, and a stalagmite slowly grows from the bottom up. Time is typically recorded in alternating light and dark layers " each pair represents a year.

When a large earthquake shakes the ground, old cracks may seal and new ones open. As a result, some groundwater seeping through the cave ceiling traces a new pattern of drips " and, eventually, stalagmites " on the cave floor. Thus it is possible that each new generation of stalagmites records the latest earthquake.

The scientists use fine drills, much like those used by dentists, to burrow into the stalagmites to collect material for dating. In addition to the 1811-12 earthquake, their investigation has recorded seven historic earthquakes dating as far back as almost 18,000 years before the present. Understanding the NMSZ's past, including whether quakes recur with any regularity, will help the scientists predict the potential timing of future quakes.

In coming months, Hackley and his colleagues plan to expand the study, collecting stalagmites from caves across Indiana, Missouri and Kentucky. They hope that the new data will help to fill in more of the missing history of the NMSZ. **WHEN & WHERE**

For more information on the 2008 Joint Meeting visit http://www.acsmeetings.org.