21-Sep-2017 10:05 AM EDT, by University of Virginia Darden School of Business
favorite_border 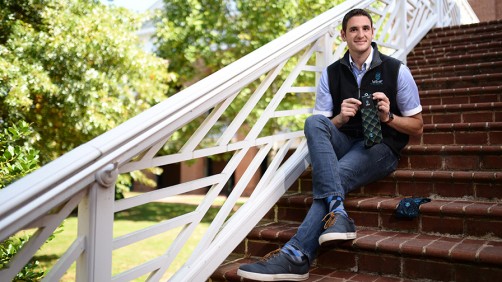 Dan Friedman's (Class of 2019) sock business for tall men will donate a portion of all profits to charity.

Newswise — His twin brother, Mike, has him beat by two inches. While their height has always been a key part of their personas and helped facilitate certain activities — Friedman’s brother was a walk-on basketball player at Syracuse. However, height was not without its negatives; chiefly, an inability to find fun, funky, fashionable socks that could comfortably accommodate their plus-sized feet.

The personal fashion need was one driving force behind TallOrder.com, the designer sock company for men’s sizes 12 to 20 that Friedman launched with his brother and mother on 18 September.

The other, more somber impetus behind the launch is the desire to commemorate the legacy of their father, Andrew, who was working at the World Trade Center and killed in the terrorist attacks on 11 September 2001. With every TallOrder.com sale, 10 percent of the profits will go to benefit Tuesday’s Children, a charity founded in the wake of the attacks that helped the Friedman family and others like them and now works with communities impacted by loss.

“The response from our community was incredible,” Friedman said of efforts made by friends and neighbors in the wake of the attacks sixteen years ago. “People showed us so much love and generosity, and we always said it would be a tall order to pay it back.”

While the sock company won’t truly pay back the immense gratitude the family feels, it will make an effort to pay things forward.

Friedman and his family are now busy learning what it means to launch and run a fashion business, a background shared by none of the family members.

Friedman studied business in college and worked at Bloomberg immediately after graduation, but as TallOrder.com began to look more and more like a viable business, Friedman sought an MBA program that could provide the foundation for future growth.

Applying to the University of Virginia Darden School of Business on a whim after hearing good things about the School’s entrepreneurship program, Friedman said he fell in love with Darden after visiting, and a scholarship from the Batten Institute for Entrepreneurship and Innovation ultimately made the decision an easy one.

Leaving the day-to-day operations in the hands of his mother and brother, Friedman is now immersing himself in the First Year core curriculum that he hopes will help him develop a holistic view of the company, its capabilities and its opportunities.

“My family allowed me to come down here and really focus on the bigger picture behind the company,” Friedman said. “If we do as well in our initial run as we think we are going to do, and we want to scale up and raise additional capital, there’s so much more we need to learn. We need to understand how to pitch the company to venture capitalists, how to strategically position in our niche market, and how to decide what other products to create in the future.”

Diving into scores of cases within the first few weeks of Darden, Friedman said he doesn’t always see the direct link between the case lessons and his family’s startup, but he trusts that the connections will come, and can already feel the auxiliary benefits of working in a learning-team environment.

“If nothing else, the whole experience has made me a better collaborator,” Friedman said. “It’s also helping me take the longer view. Yes, it’s going to be important to know how to calculate contribution margin in accounting, but it’s more about the strategic decisions that go behind it.”

Friedman has also already tapped the Darden network, and recently met with Kristina Loftus (MBA ’17), whose Rhoback casual wear company has made impressive headway in its short life as a company.

“She gave me great advice about balancing the company and study,” Friedman said. I’m learning to make good coffee and function on less sleep. But at the end of day, when you’re super passionate about something and you believe in its potential, you’ll take those sleepless nights because you want to see the company succeed.”

They recently received one unexpected endorsement, when one of the biggest stars in NBA history — Los Angeles Lakers legend Shaquille O’Neal — posed with a pair of TallOrder socks.

The startup has also received strong support from the Darden community, with Friedman’s fellow First Years, many of whom were already wearing TallOrder socks, organizing a First Coffee in honor of the venture on launch day and surprising Friedman by inviting his brother Mike to the event.

“After getting to know Dan over the past few weeks, we all felt inspired to support him, his family, and their new business,” said Ben MacGlashin (Class of 2019) “Dan’s constant enthusiasm and optimism has inspired all of us, and keeping with the Darden spirit, the entire class wanted to surprise him and make the launch even more memorable.”

Speaking just before TallOrder’s formal launch, in which it will offer eight different socks of two colors each, Friedman was anxiously awaiting the culmination of what began as a lunch table conversation years ago.

“We feel really good about the product and its mission and we’re so excited to see it get off the ground,” Friedman said.