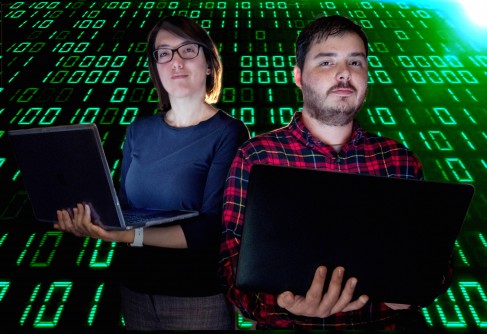 Newswise — Two University of Arkansas at Little Rock students are looking to make a name for themselves in the world of hackathons.

DiCicco and Watts, working in conjunction with two students from the University of Alabama and Florida Institute of Technology, beat out 28 other teams for the top prize, a 3D printer, for their project, Tweety Wallet. They also won the Best Use of Amazon Web Services award, which comes with a $250 Amazon Web Service credit.

“Tweety Wallet is a multicurrency cryptocoin wallet,” DiCicco said. “It can hold any type of cryptocurrency, but it is configured for Bitcoin, Zcash, Ethereum, and Litecoin.”

During a hackathon, teams have 24 hours to develop a prototype app. DiCicco and Watts wanted to build an app that concentrated on data and visualization while a third team member wanted to focus on cryptocurrency. Their interests seemed to be a match made in heaven to combine the three trending topics.

The prototype app retrieves tweets from Twitter with hashtags that correspond to cryptocurrency. The app then runs a sentiment analysis to determine if current views of the digital currency are positive or negative. This information helps users determine if they should buy, sell, or hang on to their digital currency.

“Cryptocurrency can change in an instant,” Watts said. “Whether it is positive or negative is going to tell if it is going up or down in price. The sentiment analysis is a faster prediction than stock market prices.”

Safety is also of paramount concern to the hackers. In order to log in to the app, a user must enter a password and be verified as the account owner through facial recognition. A text alert is also sent to the user’s cell phone to tell them that the account has been accessed.

Last year, DiCicco and Watts also won the Best Use of Amazon Web Services for their project, “Atrocious Apartments,” a website that allowed apartment hunters to view crimes that occurred within a one-quarter mile radius of an apartment complex and provide a description of the incidents and when they happened.