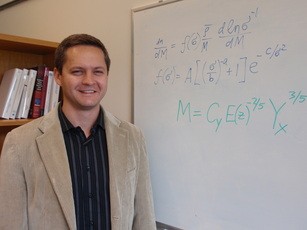 Newswise — Like referees with different vantage points concurring on an important call in a tight football game, an international team of cosmologists has independently confirmed the accelerating expansion of the universe.

A decade ago, astronomers studying the relatively uniform brightness of exploding stars to estimate cosmic distances discovered that the expansion of the universe appeared to be accelerating. Gravity should have been causing the expansion, which followed the big bang, to become slower with time. This gave rise to the mystery of dark energy, the unknown force theoretically responsible for the acceleration.

Now cosmologists, including the University of Chicago's Andrey Kravtsov, have come to the same conclusion via a completely different method: tracing the evolution of galaxy clusters. Often containing hundreds of galaxies, these clusters are the largest visible masses in the cosmos that are held together by gravity.

"This result could be described as 'arrested development of the universe,'" said Alexey Vikhlinin of the Smithsonian Astrophysical Observatory in Cambridge, Mass., who led the research. "Whatever is forcing the expansion of the universe to speed up is also forcing its development to slow down."

The cosmologists will publish their findings in the Feb. 10 issue of the Astrophysical Journal. They announced their findings during a Dec. 16 news conference organized by the National Aeronautics and Space Administration.

Vikhlinin and his colleagues used NASA's Chandra X-ray Observatory to observe the hot gas in dozens of galaxy clusters. Some of these clusters are relatively nearby, while others are more than halfway across the universe. The observatory is named for the late University of Chicago Professor Subrahmanyan Chandrasekhar, who received the 1983 Nobel Prize in Physics.

Computer simulations of galaxy cluster evolution performed by University of Chicago alumnus Daisuke Nagai, Ph.D.,'05, now an Assistant Professor at Yale University, and Andrey Kravtsov, Associate Professor in Astronomy & Astrophysics at the University of Chicago, provided the theoretical underpinning for the analysis and interpretation of the Chandra data. The current paper on cosmological constraints is the most recent in a series of related studies that Vikhlinin, Kravtsov and Nagai have published together in the last three years.

The team's results strengthen the evidence that dark energy is the cosmological constant, a steady force operating pervasively throughout the universe. "This is remarkable because there is no particular known reason why it should be so," Kravtsov said.

Einstein considered the cosmological constant to be one of his greatest blunders. He introduced the factor into his theory of general relativity to accommodate a stationary universe, the dominant idea of his day. But his constant fits nicely into the modern concept of an expanding universe, a product of the big bang theory and all existing observations.

Although the constant is a leading candidate to explain dark energy, theoretical work suggests that it should be about 10120 (1 followed by 120 zeroes) times larger than observed. This led scientists to seek alternatives to general relativity, including theories involving hidden dimensions.

"A lot more testing is needed, but so far Einstein's theory is looking as good as ever," Vikhlinin said.