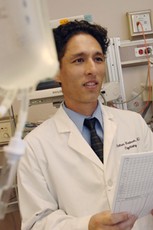 Newswise — Young adults who abuse amphetamines may be at greater risk of suffering a heart attack, UT Southwestern Medical Center researchers have found.

In the study, available online in the journal Drug and Alcohol Dependence, researchers examined data from more than 3 million people between 18 and 44 years old hospitalized from 2000 through 2003 in Texas and found a relationship between a diagnosis of amphetamine abuse and heart attack.

Individual case reports have suggested a link between heart attack and amphetamine abuse, but this is believed to be the first epidemiological study of a large group of people on the issue, said Dr. Arthur Westover, assistant professor of psychiatry at UT Southwestern and the study's lead author.

"Most people aren't surprised that methamphetamines and amphetamines are bad for your health," Dr. Westover said. "But we are concerned because heart attacks in the young are rare and can be very debilitating or deadly."

Amphetamines are stimulants that can be used to treat medical conditions such as attention-deficient disorder. They are illegally abused as recreational drugs or performance enhancers.

The researchers note that abuse of methamphetamine, a type of amphetamine often sold illegally, is increasing in most major U.S. cities.

In Texas, the researchers found greater amphetamine abuse in the north and Panhandle regions.

Amphetamines may contribute to heart attacks by increasing heart rate and blood pressure and by causing inflammation and artery spasms that limit blood to the heart muscle. More research is needed to determine the exact mechanism of how amphetamines work on the heart, he said.

The current research could help doctors determine the cause of heart attacks in young adults, as well as treatment. Doctors recognizing an amphetamine-caused heart attack might choose not to administer a beta-blocker medication, a common treatment for heart attack, because it could interact with methamphetamine to make the heart attack worse.

The results could have broad implications in the general population, Dr. Westover said. Texas ranks 27th among all states in use of methamphetamine among 18- to 25-year-old adults, according to a 2006 government report.

"We're talking about a state that is near the middle of prevalence of methamphetamine use in the United States, so it's possible that the number of heart attacks in young adults in other states with a much higher prevalence of amphetamine abuse may be higher as well," said Dr. Westover, who is a National Institutes of Health Multidisciplinary Clinical Research Scholar at UT Southwestern.

Dr. Paul Nakonezny, assistant professor of clinical sciences and psychiatry at UT Southwestern, was also involved in the study.

The work was supported by a North and Central Texas Clinical and Translational Science Initiative grant from the National Center for Research Resources, a component of the National Institutes of Health.